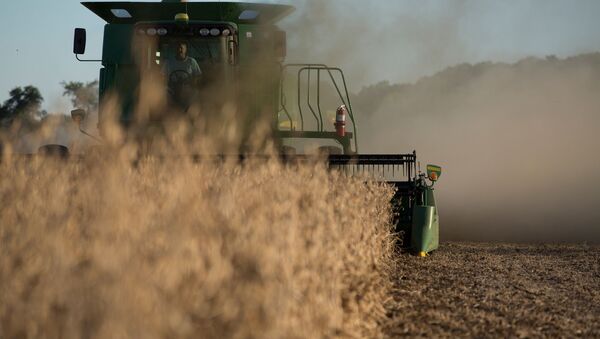 Earlier, the Chinese government's customs tariff commission published two lists of US produce to be exempted from additional import duties for the period from 17 September 2019 to 16 September 2020.

According to Bloomberg media outlet, citing unidentified sources familiar with the matter, the Chinese government has approved new waivers to several domestic state and private firms, excepting them from tit-for-tat tariffs on soybeans imported from the US.

The US and China have been engaged in a trade conflict since March 2018, when the Trump administration imposed the first round of its additional trade duties on Chinese goods, worth $50-60 billion. More than 1,300 categories of Chinese imports were made subject to tariffs, including aircraft parts, batteries, flat-panel televisions, medical devices, satellites, and various weapons. This prompted a reciprocal response from Beijing that affected 128 US products, including aluminium, airplanes, cars, pork, and soybeans.

Soybeans constitute a major portion of US exports to China. Soybean sales drastically plummeted amid the trade dispute, hurting US farmers by dropping 74% in 2018 compared to the previous year.