Macron Believes Condition Ripe for Rapid Return to Negotiations Between Iran, US - Report 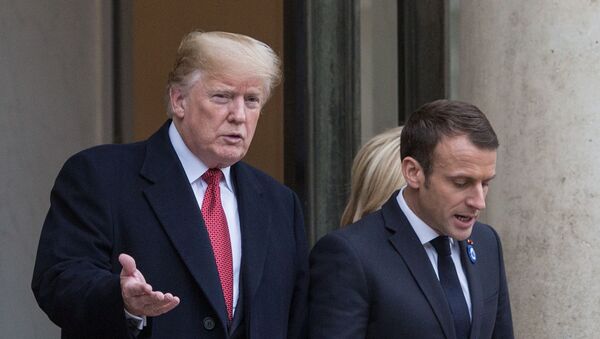 French President Emmanuel Macron, during a speech at the UN General Assembly earlier on Tuesday, said that the United States, Iran and other signatories of the 2015 nuclear agreement, as well as Middle Eastern countries, must resume talks to avoid conflict.

According to a French presidential official, cited by Reuters, Macron met Iranian President Hassan Rouhani on Tuesday, shortly after holding talks with US President Donald Trump. Macron told Rouhani that it would be a "lost opportunity" if the Iranian president left the US without meeting Trump, Reuters said, citing the UK press pool.

"What is important is that if he leaves the country without meeting with President Trump, this is a lost opportunity", Macron said during a meeting with Rouhani and British Prime Minister Boris Johnson, who said he agreed with the French president, according to Reuters.

"The conditions have been met for a rapid resumption of negotiations. It is now up to Iran and the United States to seize the opportunity", Macron told reporters after separately meeting both Trump and Rouhani, according to AFP.

Macron reportedly met with Rouhani for some 90 minutes on Monday night.

Trump earlier declared that Washington does not "need a mediator", adding - with regard to Iran - that "they know who to call", when he was asked by reporters about France's attempts to mediate the Iran issue.

A special plan to reduce tensions between Washington and Tehran was announced by Macron at a meeting with US President Donald Trump on the sidelines of the G7 summit in French Biarritz earlier in August. The French plan envisages the extension of a $15 billion credit line to Tehran - guaranteed by Iranian oil - if the Islamic republic comes back into compliance with the Joint Comprehensive Plan of Action (JCPOA). Apart from this, Tehran would also have to agree not to "threaten the security" of the Persian Gulf or to impede maritime navigation in the area and, in addition, Tehran would have to commit to regional Middle East talks in the future.

Earlier on Tuesday, Trump said during remarks at the UN General Assembly that the United States will tighten sanctions on Iran if it does not submit to US demands. Trump reiterated that the United States is ready to engage in dialogue and embrace friendship with Iran, saying that Washington wants partners, not enemies. Trump defended, however, his 2018 decision to pull the United States out of the JCPOA (Iran nuclear deal) because it did not allow inspection of important sites and did not cover ballistic missiles.

Rouhani said Tuesday that he was open to discuss small changes, additions or amendments to the 2015 nuclear deal between Tehran and six major powers if Washington first lifts sanctions imposed on the Islamic republic, Reuters said.

The Iranian president also said that Trump must restore trust before any talks could start.

"We must create mutual trust [...] If the government of the United States of America is willing to talk, it must create the needed conditions", Rouhani said, cited by Fox News.

The Iranian Foreign Minister, Mohammad Javad Zarif, when asked by reporters whether Iran was open to changes in the nuclear pact, said, "no changes to the JCPOA", according to Reuters.

The US has ratcheted up sanctions on Iran since last year as part of its "maximum pressure" campaign, targeting the Iranian economy, most recently through the central bank and the sovereign wealth fund. Zarif called the US move a sign of despair on the part of the Trump administration.

The standoff between Iran and the United States has over the past several months prompted the situation in the Persian Gulf to deteriorate. A series of attacks on tankers in the Gulf of Oman and Hormuz Strait, as well as most recently a drone attack against oil facilities of Saudi Arabia, have worsened relations, with Washington and its allies placing the blame on Iran. Tehran has refuted all accusations.