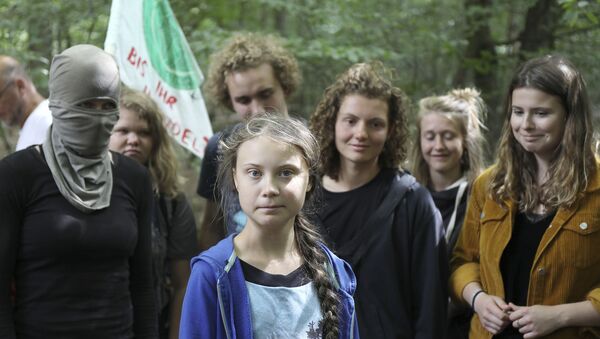 In his recent attack on the climate movement as a ploy orchestrated by the left, commentator, author and Fox news contributor Dinesh D'Souza has accused the establishment of using teenage climate idol Greta Thunberg as a political pawn.

D'Souza shared an image of Thunberg alongside a Nazi poster, suggesting a similarity between the propaganda tactics of today's left versus the “earlier left”.

“Children – notably Nordic white girls with braids and red cheeks – were often used in Nazi propaganda”, D'Souza tweeted. “An old Goebbels technique! Looks like today's progressive Left is still learning its game from an earlier Left in the 1930s”, he continued.

Children—notably Nordic white girls with braids and red cheeks—were often used in Nazi propaganda. An old Goebbels technique! Looks like today’s progressive Left is still learning its game from an earlier Left in the 1930s pic.twitter.com/E4q2KZ526s

​While the idea that Greta Thunberg, an autistic girl who has risen to international prominence for her doomsayer rhetoric and solitary protests outside of the Swedish parliament and became the figurehead of the climate moment, is utilised by the media and politicians alike for personal gain has been voiced before, D'Souza's comparison sparked particularly strong reactions, generating tens of thousands of comments.

The most recurring theme was launching vile counter-attacks on D'Souza for picking on a 16-year-girl.

Only an asshole can compare #thunberg with nazi propaganda! Congrats, you just did so https://t.co/YH8aiiqh3V

​Another one was suggesting that the right themselves used the same techniques. One user shared a picture of a blonde pro-gun activist with braised juxtaposed with the same Nazi poster.

I know another group who uses this technique too 🙄 pic.twitter.com/5FGvSJCCEK

​Another posted a compilation of Fox News presenters, all blonde.

Oh, I thought it's a picture of a female presenter from Fox. pic.twitter.com/sM2qilH9oF

​Yet another subplot was comparing the image of US Vice President Mike Pence to Nazi propaganda.

I saw this other picture yesterday. pic.twitter.com/bo1Yip1gKC

​Indian-born conservative author D'Souza is a staunch supporter of Donald Trump, having been pardoned by the president in May 2018 for a felony conviction of making illegal campaign contributions in 2012.

Thunberg made international headlines last Friday, as she spearheaded another Global Strike for Climate in dozens of countries.

Prior to the strike, the 16-year-old Swedish girl addressed Congress and slammed President Donald Trump's decision to withdraw from the Paris Climate Change Agreement.

Thunberg's calls to skip school for the sake of climate ignited a nationwide movement in Sweden, later spreading to dozens of countries and earning her a Nobel Prize nomination alongside a plethora of awards.

However, she is not without controversy, having been called “Ayatollah of Climate Change” and “Apocalypse Guru” for her incessant rhetoric. The fact that her followers have repeatedly likened her to a prophet or even a God-like figure has sparked accusations of cultism.

Climate change is the religion of the elite. pic.twitter.com/B7YkU08jpI