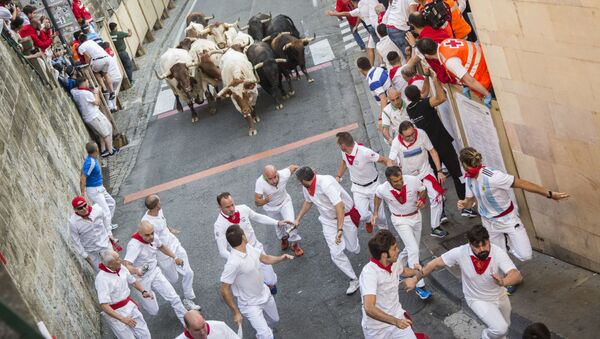 © Sputnik / Alejandro Martinez Velez
/
Go to the mediabank
Subscribe
International
India
Africa
The 'running of the bulls' event involving a group of people fleeing a herd of charging bulls let loose on Spanish streets is an historic part of summer festivities in some sections of the country.

A 12-year-old boy was knocked into a bull-pen before a Spanish bull-run event on Sunday, before an annual fiesta event in eastern Spain.

The boy was watching the bulls preparing for the event from a platform above their pen, but fell after one of the animals broke the railing on which he was leaning.

Footage of the incident shows the bull using it's horns to lift up a heavy metal gate, which knocks the safety rail above away, causing the boy to plummet into the the bull pen.

The boy lands at the bull's hooves and the confused animal tries to butt at him with its horns and then tramples him with its hooves, leading to an immediate reaction from the crowd while some rush to help the boy with sticks.

It was reported on Sunday by Spanish media that he was not seriously hurt but has been kept for medical treatment.

According to the Daily Mail, authorities have said that they have reviewed their safety measures and permitted the fiesta to continue.

The Spanish bull-running events began on 14 September and will continue throughout the week, ending next weekend.