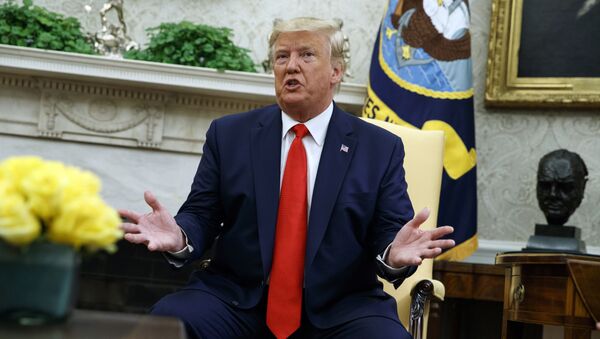 US President Donald Trump said earlier that a meeting with Iranian President Hassan Rouhani on the sidelines of the United Nations General Assembly (UNGA) in New York was not scheduled "at this moment".

"I never rule anything out [...] nothing scheduled at this moment", Trump told reporters on Monday. When asked about France's attempts to mediate the Iran issue, Trump said that "we don't need a mediator [...] they know who to call".

Earlier this month, Paris said that it would continue making every effort to return Iran to the full implementation of the Joint Comprehensive Plan of Action (JCPOA). In particular, in a bid to save the JCPOA, French President Emmanuel Macron proposed a $15 billion credit to Iran in exchange for Tehran returning to fulfill the deal. The plan was discussed with Trump, who, according to media reports, viewed the idea positively.

In May 2018, the United States announced its withdrawal from the JCPOA and the reimposition of sanctions on Iran. A year later, Tehran made it be known that it would start abandoning portions of its nuclear obligations every 60 days unless the European signatories ensured Iran's interests under the agreement.

For the past several months, Paris has been striving to save the accord by holding meetings and consultations with Iran's leadership.

Nevertheless, earlier in September, Iran began the third stage of rolling back its obligations.

Earlier this month, Iranian Foreign Minister Mohammad Javad Zarif said a meeting between Rouhani and Trump at the UN General Assembly would be possible, but only in the 5+1 format similar to that used in the 2015 Iran nuclear agreement, and not at a bilateral level.

Rouhani has said that Iran would propose a new initiative to ensure the security of the Persian Gulf and the Sea of Oman at the UN General Assembly, with a plan calling for cooperation between the countries of the region.

Rouhani's trip to the UN headquarters in New York comes against the backdrop of heightened tensions between his country and the United States. While the two countries have traded accusations for months about their activities in the Middle East and Gulf region, things escalated after Washington blamed the attack on Saudi Aramco on Tehran, even though responsibly for the attack was claimed by Yemen's Houthis. Tehran has denied having any role in the incident.

Rouhani said that Washington seeks to use the recent drone attacks on Saudi Aramco oil facilities to its advantage, by striking billion-dollar deals and attaining a permanent presence in the Middle East.