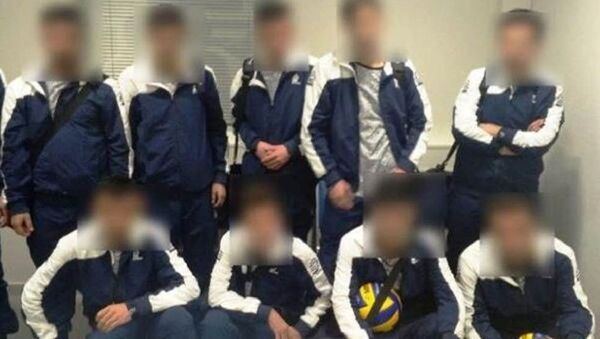 The men were hoping to travel from Greece to Switzerland using Ukrainian passports that had been reported either lost or stolen. Their attempt comes against the backdrop of an influx of migrants – mostly Syrians and Afghanis – from Turkey, which is threatening to reopen its border for migrants to flee to Europe.

A group of ten Syrian refugees have been arrested while trying to fly from Greece illegally disguised as Ukrainian volleyball players.

Greek police said the men were detained at Eleftherios Venizelos airport near Athens on Saturday after failing to get past passport control.

Police questioned the men and determined they were Syrian nationals hoping to reach Zurich, Switzerland. They presented Ukrainian passports during the ID check, which had been either lost or stolen. The men will now face charges of illegally trying to exit the country using bogus identities.

An image of the refugees has been released, showing them wearing matching sports kits and carrying volleyballs and sports bags for good measure.

Greece has recently overtaken Spain and Italy as the busiest gateway into Europe for migrants fleeing poverty and violence in Africa and the Middle East.

According to United Nations estimates, over 25,500 refugees and migrants came to Greece by sea from January to August this year – a 32-percent rise year-on-year.

Although the numbers are just a fraction of those in 2015, when hundreds of thousands of migrants came ashore on the Greek islands – many of them via people smugglers – the never-ending influx of arrivals has rendered some refugee camps overcrowded and forced local authorities to sound the alarm.

For instance, an EU-sponsored facility on the island of Lesbos, designed for 3,000 people, has recently seen its population reach 12,000, with aid workers complaining about harrowing humanitarian conditions there.

The majority of migrants are from Afghanistan, Syria, and the Democratic Republic of Congo; they mainly arrive from Turkey, which hosts some 3.6 million refugees – the world's largest refugee population.

Turkey has welcomed Syrian refugees for years but has recently threatened to allow them to leave for Europe if it does not receive more aid for a safe-zone plan. Turkey plans to create a safe zone in northern Syria and move the Syrian refugees over there, but its plans have stalled amid disagreements with Washington over the fate of the US-backed Kurdish militia, which is seen in Turkey as a terrorist organisation.

“This either happens or otherwise we will have to open the gates,” Turkish President Erdogan said of the planned EU aid. “Either you will provide support, or excuse us, but we are not going to carry this weight alone. We have not been able to get help from the international community, namely the European Union.”