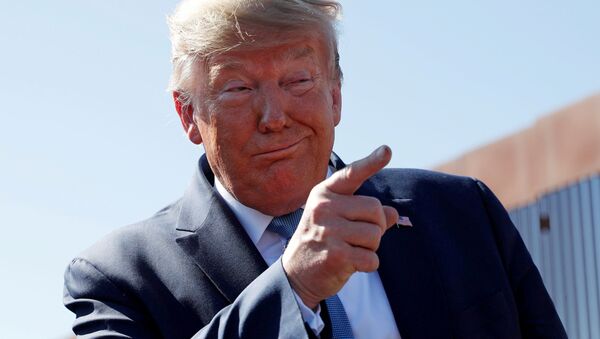 The creators of a music parody video posted online are calling for politicians to stop fighting and focus instead on doing productive governmental work.

Have you seen Trump dancing with Bernie Sanders, Elizabeth Warren and Barack Obama? Well, you can now, in a video posted online this Monday, which superimposes the US politicians onto the classic ‘YMCA’ gay disco beat originally performed by The Village People.

In the video, Trump takes the place of the band’s frontman Victor Willis, while Obama and a number of Dem presidential candidates take the place of other members. Prominently, Warren, who says she is part-native American, which earned her the nickname ‘Pocahontas’ from Trump, took the place of the Indian Chief.

The video also superimposes the banner on the Manhattan YMCA building with Trump’s MAGA slogan and the song of course has repurposed the 70’s gay disco bawdlery with its own lyrics.

“Young man, Walk away from the hate, We're all human and we don't segregate, Just like women, Help make America great,” the updated version strives to lyricize.

The video was made by Jason Fishbein - a lawyer who represented WikiLeaks and its founder Julian Assange and acted as a witness in the Mueller Commission – along with a group of anonymous Trump supporters.

“We were looking for something un-impeachingly positive,” Fishbein said, according to The Daily Mail. “We wanted to tell both sides, Republicans and Democrats, to stop the nonsense. The divisions are bad for the country. It's a song about unity.”

According to Fishbein, The Village People, at then height of their popularity, offered a positive image of gay people and the lawyer sees support for Trump in a similar light.

“Nowadays, people who wear MAGA hats get assaulted. Being with Trump feels a little bit like what being gay probably felt like,” he remarked.

One of the creators of the dance video, who goes online as @Mad_Liberals, says that he has made pro-Trump satire before, but had to stop becuase he felt threatened physically. He asserted that he had never voted until he voted for Trump in 2016.

“Unlike politicians from either the right or the left, Trump ran to make this country better,” he quipped.

According to @Mad_Liberals, the purpose of the video is to have fun without insult.

“I tried to stay sunny,” the creator joked. “Who doesn't like Bernie in leather? Or Cory Booker in a cowboy hat? As for Elizabeth Warren in an Indian outfit? It's a natural.”