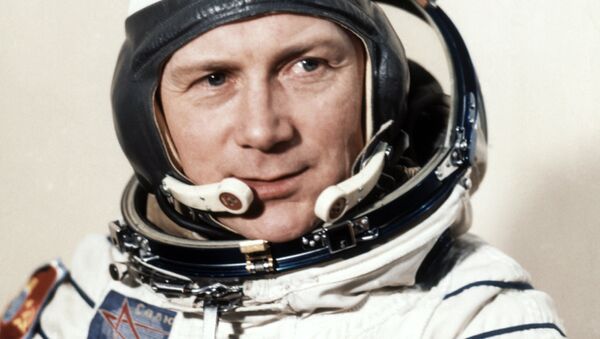 Jan Worner, director general of the European Space Agency, said Jahn’s death has touched him deeply - “whenever we met, it was very personal, a friendship was created that wasn't only about space travel and his untiring support for European astronauts. I'm deeply thankful to have been able to meet him and will not forget him," he added.

Sigmund Jahn, a German cosmonaut and pilot who became the first German to fly into space, died 21st September aged 82, it’s been confirmed.

While the US had completed a total of five moon landings by 27th August 1978 when Jahn Soyuz 31 took off for Salyut 6, the Cold War space race was very much ongoing, and indeed had entered a new phase, in which Moscow and Washington sought to open up space exploration to their international allies.

The Soviet Union was first off the mark by some margin, launching the Interkosmos programme in February 1978 by sending Czechoslovakian cosmonaut Vladimir Remek into space. Over the next 13 years, 18 Interkosmos flights would ferry galactic explorers to space and back, the travellers hailing from Eastern European nations comprising the Warsaw Pact, and allied countries including Afghanistan, Cuba, Mongolia, Vietnam.

Non-aligned nations such as India and Syria were also invited to participate - by the time the programme ended in 1991, cosmonauts from Austria, Britain and France had even taken part in the programme. Such was Interkosmos’ broad reach and appeal, it was responsible for putting the first black and Hispanic person in space - Arnaldo Tamayo Mendez of Cuba - and the first Southeast Asian person in space - Pham Tuan of Vietnam.

Upon reaching Salyut 6, Jahn conducted experiments in remote sensing of the earth, medicine, biology, materials science, and geophysics. After completing 124 orbits, he returned to Earth on Soyuz 29, landing 3rd September 1978 having spent 7 days, 20 hours, and 49 minutes in space.The scientific discoveries he made in space would become the subject of his subsequent dissertation, which he completed at the Potsdam Central Institute for Geophysics, the predecessor of modern Germany’s Research Centre for Geosciences.

To say the least, Jahn was widely celebrated in East German society, receiving some of the state’s highest honours, with schools even named after him - his journey also lent further international legitimacy to the German Democratic Republic, which had only been recognised as an “independent sovereign state” by the neighbouring Federal Republic of Germany five years prior.

​Jahn was in many ways the perfect candidate for the Interkosmos programme - with extensive experience as a wing commander in the East German military, his abilities qualified him for an advanced education at the Moscow Military Academy in Moscow, where he learned fluent Russian. Upon his return to the GDR, he was put in charge of fighter-plane pilot education and aviation security in the rank of Lieutenant-Colonel. He would be chosen to participate in Interkosmos and dispatched to Star City near Moscow, home to the Yuri Gagarin Cosmonaut Training Centre, in November 1976.

After his return from space, Jahn became head of the newly-founded Centre for Cosmic Education within the Airforce of the National People's Army in Straußberg, near Berlin. He advocated collaboration and partnership between astronauts and cosmonauts worldwide, and was fundamental in the founding of international Association of Space Explorers, an exclusive club for people who’d completed at least one full-Earth orbit.

​Following German reunification in 1990, Jahn went on to work as an advisor for the European Space Agency and German Aerospace Centre (DLR), and also assisted Russian space agency Roskosmos, occasionally returning to Star City in the process. He formally retired in 2002.

"German space travel has lost a globally recognized cosmonaut, scientist and engineer. The first German in space always saw himself as a bridge-builder between East and West and for a peaceful use of space," Pascale Ehrenfreund, head of the DLR said in a statement.