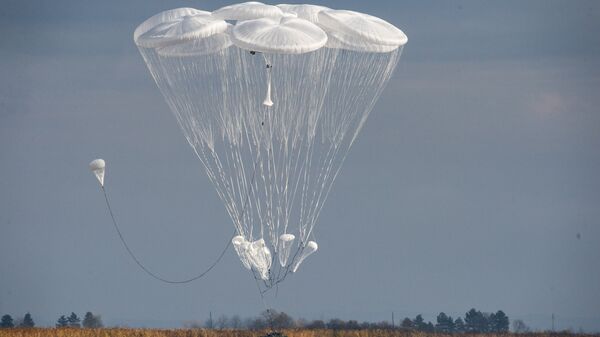 © Sputnik / Evgeny Biyatov
/
Go to the mediabank
Subscribe
International
India
Africa
Ilya Tsukanov
All materialsWrite to the author
The incident took place during the Center-2019 military exercises, which involved over 128,000 troops, more than 20,000 pieces of military equipment and about 600 aircraft from members of the Shanghai Cooperation Organisation security alliance.

Two BMD infantry fighting vehicles were destroyed during a paradrop over a military range in Russia’s Orenburg region, the Russian defence ministry’s press service has confirmed.

The incident, which saw the pair of vehicles smash into the ground after being deployed from an Il-76 transport system, was said to have taken place on September 20, with video footage showing the vehicles falling, and photos from on the ground afterwards showing both pieces of armour totally destroyed.

According to the defence ministry, the vehicles were unсrewed, thankfully, and no injuries were reported.

The Russian military said the cause of the parachute failure was being determined. However, days earlier, a respected Russian military blog reported that the Center-2019 drills would see the first-ever use of a new platformless parachute system for the BMD-4M, a class of amphibious IFVs.

The defence ministry did not specify the type of parachute used in the failed paradrop, although the vehicles affected looked like BMD-2s, a separate class of airborne IFVs.

The Center-2019 exercises ran between September 16 and September 21, with eight training ranges across Russia and ranges at several other countries involved. In addition to Russia, the drills involved troops from other Shanghai Cooperation Organisation members, including China, Kazakhstan, Kyrgyzstan, Tajikistan, Uzbekistan, India and Pakistan.

Some 130,000 troops, thousands of vehicles and hundreds of aircraft were involved in the drills, with the exercises training for efforts to combat regional terrorism and ensuring military security in Central Asia.