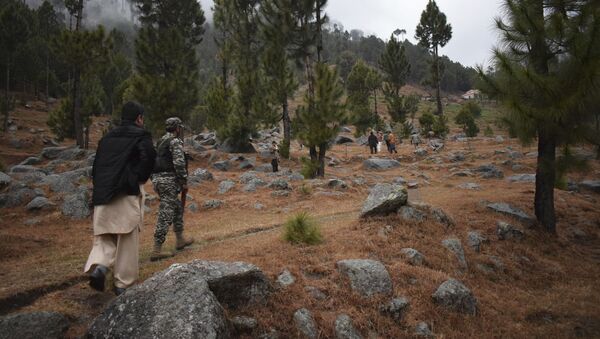 On Sunday, the Indian daily Hindustan Times reported that at least 40 people were receiving terrorist training in the Balakot facility.

In a report, the daily said the terrorists were being trained to carry out attacks in the Indian state of Jammu and Kashmir and other places in the country including Gujarat and Maharashtra.

It further claimed the terrorists were avoiding international exposure by training under a new name.

“Balakot has been reactivated by Pakistan very recently. It had been damaged and destroyed. And that is why people have got away from there and now it has been reactivated. It shows some action had been taken by Indian Air Force and now they have got the people back there,” Army Chief General Bipin Rawat told media in Chennai while attending an event at the Officers Training Academy.

"Pakistan violates ceasefire to push terrorists into our territory. We know how to deal with ceasefire violations. Our troops know how to position themselves and take action. We are alert and will ensure that maximum infiltration bids are foiled," Rawat added.

The Indian Air Force bombed the supposed terror training camp in Balakot in Pakistan’s Khyber Pakhtunkhwa province on 27 February. The bombing was carried out in response to a suicide attack on an Indian security convoy on a highway in India’s Pulwama region on 14 February which claimed the lives of 40 Indian soldiers.

After the attack in Pulwama, relations between India and Pakistan deteriorated.

Following the Indian Air Force’s claim that it eliminated about 300 terrorists in what it called a pre-emptive strike on the Jaba Top JeM training facility in Balakot, Islamabad and New Delhi were engaged in an information war in which the former at first denied that an attack took place. It then said the bombs fired on 26 February had landed in an empty area and had hurt no one.

A day later (27 February), an aerial dogfight took place between Indian and Pakistan fighter pilots in the Nowshera Sector in India’s Jammu and Kashmir state. During that dogfight, the Indian Air Force claimed that one of its fighter pilots, Wing Commander Abhinandan Varthaman, had downed a Pakistani F-16 fighter plane before being captured by the Pakistan Army after his MiG-21 Bison was shot down by Pakistan Air Force jets.

Wing Commander Abhinandan drew admiration not just for this feat, but also for his composure during his captivity in Pakistan. Pakistan eventually released him on the night of 1 March. Tensions resurfaced between the two countries in August this year, more than four months after the Balakot attack.

The Indian Army chief’s claims come more than a month after the Indian parliament revoked the seven decades old temporary special status of Jammu and Kashmir.

Both countries have been using every available forum, domestic and foreign, to flag their respective stances on Jammu and Kashmir. Pakistan has said that revoking the special status violates UN Resolutions of 1948 and 1949 while India has maintained that the decision is an internal issue.