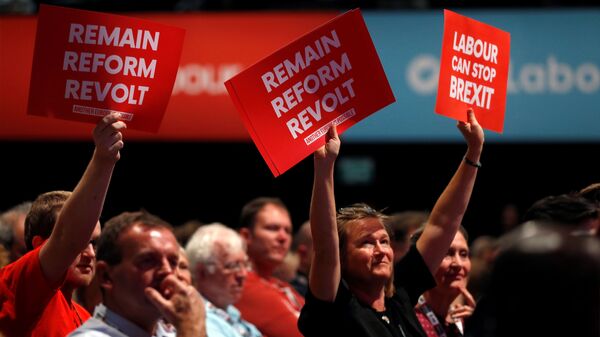 Ilya Tsukanov
All materialsWrite to the author
Ahead of Monday's conference, Labour leader Jeremy Corbyn suggested that the UK could be "better off" outside the European Union than inside it, depending on what sort of agreement could or could not be reached with Brussels.

Members of Britain's Labour Party have voted in favour of Jeremy Corbyn's Brexit strategy, supporting his position that a snap parliamentary election should be held first, with a decision made afterwards on whether the party should campaign to leave the European bloc or remain inside it in a new referendum, Reuters has reported.

Corbyn has been under pressure from party moderates to support the UK's continued membership of the EU, but has sought to unify the party in its stance on Brexit before deciding whether to leave the EU with a deal, or to scrap the results of the 2016 referendum, which saw a majority of Brits vote in favour of their country's divorce from Brussels, and stay in the bloc.

Rumours have swirled about a bid to oust Corbyn from the party leadership, with the Labour leader himself dismissing the speculation and saying he hoped to lead the opposition party to victory in fresh elections.

Tom Watson, Labour's deputy leader, has been at odds with Corbyn over his insistence on a second referendum, and has urged the party to "unequivocally back remain," a position Corbyn has rejected. 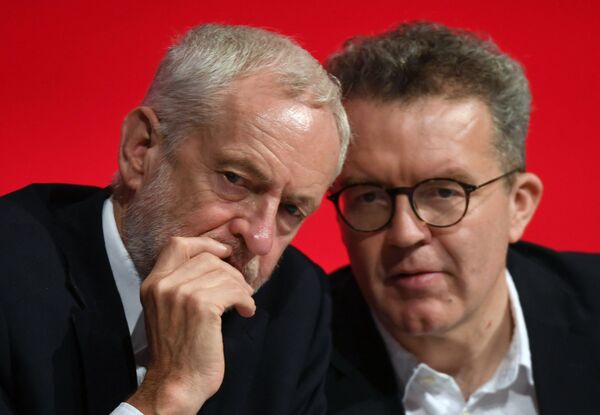 On Saturday, a draft statement of the party's position on Brexit reportedly said that Corbyn would attempt to work out a Brexit agreement with Brussels within three months if he became prime minister following a snap vote. After that, the party would hold a referendum on that deal, giving Brits a chance to either vote for it or reject it and leave the EU. Labour has called the governing Conservative Party's three years of negotiations with Brussels "shambolic," and has promised to "get Brexit sorted one way or another within six months of coming to power."

Meanwhile, British media reported Monday that Prime Minister Boris Johnson was preparing to meet his European counterparts French President Emmanuel Macron and German Chancellor Angela Merkel in New York this week in hopes of getting MPs to back a revised Brexit deal, with talks reportedly set to focus on the Irish backstop and an attempt to persuade Paris and Berlin to make clear that a new deal would have to be passed by the October 31 deadline. During his trip, Johnson is also expected to meet with EU President Donald Tusk, Irish Prime Minister Leo Varadkar, Dutch Prime Minister Mark Rutte and Belgian Prime Minister Charles Michel.

Johnson made a public commitment not to extend the Brexit deadline, but is facing an uncertain Supreme Court ruling to decide on whether he broke British law when he suspended Parliament for five weeks ahead of the Brexit deadline. Critics have accused him of acting illegally to stop lawmakers from interfering with his plan to leave the EU, deal or no deal. Johnson insists the suspension was a routine measure aimed at helping to prepare for a new session of parliament.