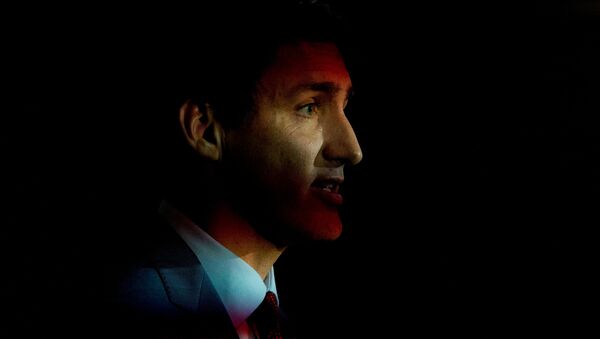 As the Canadian head of state moves to deal with the aftermath of the “blackface revelations,” it appears that this scandal isn’t the only sketchy episode in his history.

Canadian Prime Minister Justin Trudeau’s reelection bid recently suffered a serious blow when old photos that apparently depict him wearing blackface and brownface makeup were uncovered by press, prompting the politician to apologise for his "microaggressions" towards minorities.

However, this scandal is far from the only one to mar Trudeau’s record as Canada’s head of state.

The probably biggest scandal to haunt Trudeau today, the so called "SNC-Lavalin affair" involves the eponymous Quebec-based construction company which was accused of paying millions of dollars in bribes in order to secure contracts in Libya during Muammar Gaddafi’s reign.

In August, the Parliament of Canada's Ethics Commissioner Mario Dion also concluded that the prime minister had broken rules by pressuring the then-attorney general Jody Wilson-Raybould (who resigned from Trudeau's cabinet on 12 February) to settle the case against SNC-Lavalin.

During Trudeau’s visit to India last year, a controversy emerged after media obtained a photo of the prime minister’s wife with Jaspal Atwal, a terrorist from the banned International Sikh Youth Federation, at a dinner event in Mumbai.

Atlwal was previously convicted of attempted murder for the 1986 attack on a visiting Indian minister on Vancouver Island. He is an active member of the Khalistan armed movement that seeks to divide India's northern territory into a separate state for the Sikh community.

In 2017, Trudeau found himself facing an ethics committee’s investigation over potential violations of the Conflict of Interest Act during his January vacation in the Bahamas.

The allegations included Trudeau receiving a free vacation from billionaire businessman Aga Khan and for using a private aircraft, as the latter act is prohibited without permission from the ethics commissioner unless required for official state business.

And in 2016, Trudeau was forced to defend his party's "fundraising methods," as CBC put it, when the media learned that he attended a fundraiser at the Toronto home of Benson Wong, the chair of the Chinese Business Chamber of Commerce, which led to a lavish donation to the Pierre Elliott Trudeau Foundation.

As Breitbart points out, Canadian laws prohibit cash-for-access exchanges, though Trudeau defended his actions by arguing that "it would bring more middle-class jobs to Canada."