Jeremy Corbyn: UK Could Be Better Off Outside EU With Labour Deal 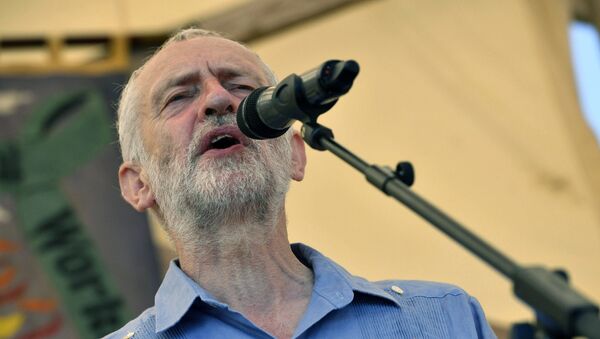 © AP Photo / Ben Birchall/PA
Subscribe
The 2019 Labour Party conference, which began on Saturday, will attempt to outline Labour policy across a number of matters. Including the party's position on regards to whether they should support a remain option in all circumstances even agains their own negotiated Brexit deal or to stay neutral.

Labour leader Jeremy Corbyn has suggested that the UK could be better off outside of the EU while talking to Andrew Marr on Sunday.

When asked if it was his view that Britain would be "better off" outside than EU than in, Corbyn replied that it "depends on the agreement you have with the European Union outside."

"We have consistently put forward what I believe to be a credible option, which is what we call the five pillars which is the customs union, the trade relationship, protection of consumer, environmental and workers’ rights, and of course, the Good Friday agreement and the peace process"

He continued, saying that it was important to remember the reasons why 17.4 million people voted to leave the EU.

"Please remember why people voted leave, why people voted remain, but also remember there is more that unites all of those people – over austerity, over investment, over education, over housing, over health, over a green industrial revolution – than there is that divides them."

Regarding the upcoming motion on Labour's Brexit position during this years conference, Corbyn told Marr that he would "respect" the outcome of the vote, even if that included campaigning "enthusiastically" for remain at a second referendum on EU membership. He reiterated however that his position was still to get a "sensible leave option" on the table.

The vote at the Labour conference will determine the Labour Party's position on a second referendum, whether the party should be explicitly for remain in all circumstances or whether the leadership should stay neutral.

Here is Labour’s draft statement on Brexit, to be approved by NEC. It commits a Labour government to negotiate new Brexit deal within three months of taking office and then putting that to British people in referendum vote three months later. Importantly it says Labour will... pic.twitter.com/3h2HkYbRMb

The divisions between the remain wing of the Labour Party and the leadership and its supporters have been exacerbated in recent weeks, accumulating in a potential motion to abolish the Deputy Leadership position currently held by Tom Watson, who is now advocating for a second EU referendum before a general election, in contrast to the Labour leadership position.

​Corbyn has long faced criticism by the remain camp of the Labour Party for not being enthusiastically in support of UK membership of the EU and even of "sabotaging" the remain campaign.

While Corbyn now claims to prefer a deal which would keep the UK in a Customs Union with the EU, and not overtly a reversal of the Brexit vote. Prior to becoming leader, Jeremy Corbyn held lifelong Euroskeptic views, voting consistently in opposition to European integration, including publicly declaring the EU a "Military Frankenstein".

000000
Popular comments
That simply does not add up if trade unionists voted remain as also the elites and their mob the referendum would have never gained 17.4 million leave votes. Comon Corbyn tell the truth 80-90% of trade union members must have voted leave. You mean the executive branch full of extremist radicals voted remain to protect their priviliged status. Then set about to betray the nation for their own selfish reasons betraying democracy engaging in anarchy with your unconditional help along every moment of this betrayal.

Rasputin002
22 September 2019, 19:40 GMT1
000000
Who will ever forget Corbyns vile support for the nazis in Ukraine killing thousands of innocent civilians in their feudal anarchistic NATO supported regime change operation. Had the UK left in 2017 the EU would not have been able to prop up this fascist regime in Ukraine. More than 10,000 lives would have been saved but for collaborators and traitors Corbyn and May.