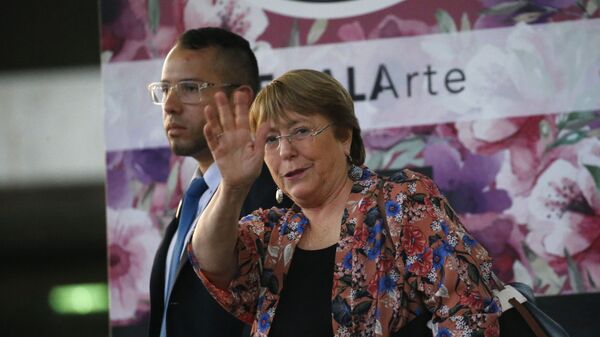 © AP Photo / Ariana Cubillos
Subscribe
International
India
Africa
Ilya Tsukanov
All materialsWrite to the author
Earlier this month, Brazilian President Jair Bolsonaro took aim at UN High Commissioner for Human Rights Michelle Bachelet, accusing her of engaging in ‘Macron-style’ meddling in Brazil’s internal affairs after she marked concerns with extrajudicial killings by police and an alleged “narrowing of the democratic space” in Brazil.

Michelle Bachelet has responded to the Brazilian President Jair Bolsonaro’s two week old Twitter attack, in which he invoked her father, a senior air force officer who died in a Chilean jail following the 1973 Chilean military coup.

“How I take things depends on who is saying them,” Bachelet, the former two-term president of Chile, said, speaking to Television Nacional de Chile on Sunday.

“So if someone is saying that their country has never been under dictatorship, that there has never been any torture there…well then let him say that the death of my father by torture ensured that Chile did not become Cuba. The truth is that I feel sorry for Brazil,” she added, referring to Bolsonaro’s previous praise for Brazil’s own period of military dictatorship between 1964 and 1985.

Earlier this month, Bolsonaro accused Bachelet of “defending the human rights of vagabonds,” telling  “Senhora Michelle Bachelet,” that “if [general Augusto] Pinochet’s people had not stopped the left in 73, - among them your father –Chile would be a Cuba today.”

Bachelet’s father, Brigadier General Alberto Bachelet, remained loyal to the democratically elected government of democratic socialist President Salvador Allende during the CIA-backed military coup of September 11, 1973, and was imprisoned and tortured after Allende’s overthrow. Bachelet died in March 1974, aged 50, after suffering a heart attack at a Santiago jail, when his daughter Michelle was 22. 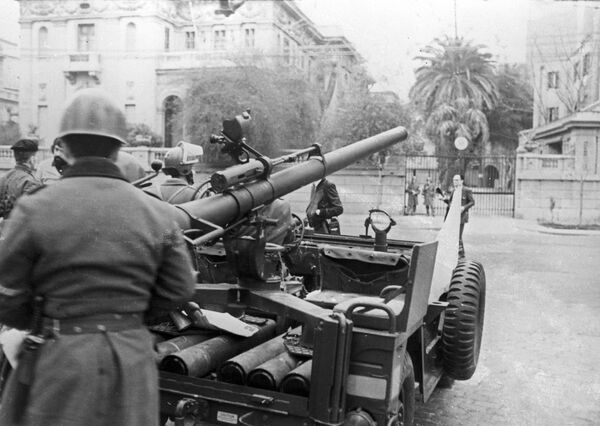 Chilean troops on the streets of Santiago, September 11, 1973.
© Sputnik / РИА Новости
/
Go to the mediabank

Current Chilean President Sebastian Pinera, ordinarily a political ally of Bolsonaro, criticised the Brazilian president over his comments about Bachelet, saying he “didn’t share” the “reference president Bolsonaro made to a former Chilean president –especially on a subject as painful as the death of her father.”

Assuming the presidency on January 1, 2019, Bolsonaro has entangled himself in multiple verbal and twitter spats with world leaders, getting in a back-and-forth spat with French President Emmanuel Macron over the latter’s alleged efforts to meddle in Brazil’s handling of its Amazon fires, mocking Macron’s wife’s appearance on social media, attacking German Chancellor Angela Merkel over Berlin’s suspension of funding earmarked for Amazon protection projects, and offering wholehearted support to US-led efforts to overthrow the government in neighbouring Venezuela.