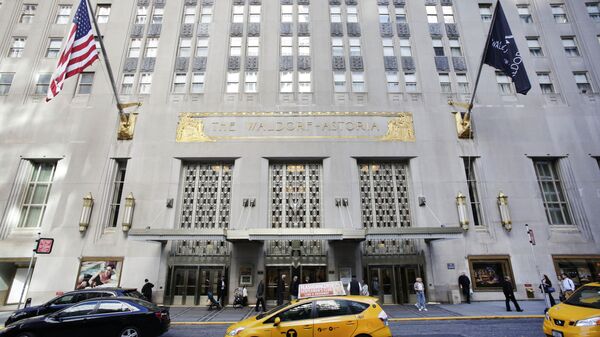 © AP Photo / Mark Lennihan
Subscribe
International
India
Africa
Ilya Tsukanov
All materialsWrite to the author
The billionaire owner of the Hilton chain of hotels was said to have died of natural causes at his Los Angeles mansion, and survived by some eight children, 15 grandchildren (among them Paris Hilton and Nicky Hilton Rothschild), and four great-grandchildren.

Long-time Hilton Hotels Corporation CEO Barron Hilton passed away late last week at his Los Angeles home, willing to leave some 97 percent of his personal fortune to the Conrad N. Hilton Foundation, a non-profit established by his father Conrad Hilton in the mid-1940s.

Barron Hilton announced that he would leave the vast majority of his fortune to the foundation in 2007, with his total wealth estimated to be worth about $3.4 billion. The gift is expected to more double the foundation’s total value from $2.9 billion to $6.3 billion.

Barron’s father Conrad Hilton had similarly committed to leave most of his fortune to his foundation, a private foundation which has awarded hundreds of millions of dollars in grants to Catholic causes, disaster relief, foster care, help for the homeless, safe drinking water projects and HIV and AIDS programmes in Africa. However, after his father’s death in 1979, Barron Hilton challenged his will, fighting a decade-long battle in court with the foundation to retain control of about one third of its assets.

The remaining 3 percent of Barron Hilton’s estate is now expected to leave millions of dollars each to his surviving family members.

Paris Hilton, possibly Barron Hilton’s most famous relative, tweeted that she was “deeply saddened” by the loss of her grandfather, calling him “a visionary, brilliant, handsome,” and kind, and saying that he had “lived a life full of accomplishment and adventure.”

I am deeply saddened by the loss of my grandfather Barron Hilton. He was a Legend, a visionary, brilliant, handsome, kind and lived a life full of accomplishment and adventure. Ever since I was a little girl I have looked up to him as a businessman. pic.twitter.com/eGFXAz1LUr

Born in 1927 in Dallas, Texas, Barron Hilton served as a navy photographer in the Pacific Theatre in World War II, and founded the Los Angeles Chargers football team in 1959, later overseeing the American Football League’s merger with the National Football League in the mid-1960s. He didn’t join his father’s company until 1951, seeking to make a name for himself selling orange juice and oil.

During his 30 year tenure as CEO of Hilton Hotels, he worked to turn the company into a major global brand. Asset management company Blackstone Group bought Hilton’s chain of 2,800 hotels for $26 billion in 2007.