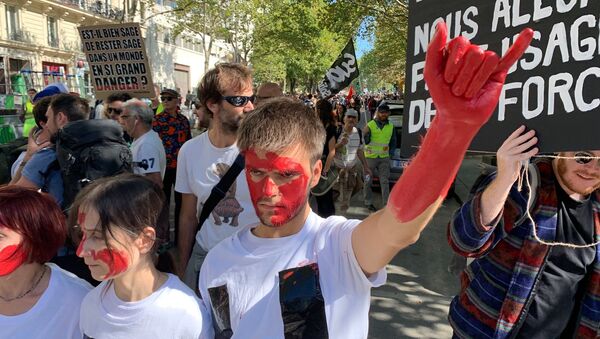 The yellow vest demonstration began in Madeleine Square and was moving toward Saint Lazare train station, where they briefly clashed with riot police, prompting a barrage of tear gas.

A march "for climate and social justice" set out this afternoon from the central Luxembourg Gardens, according to BFMTV broadcaster.

French yellow vests protesters have joined anti-climate change demonstrators in Paris. About 1,000 protesters are participating in the climate strikes, according to reports.

French police have later clashed with black-clad, masked protesters whom they have accused of disrupting a climate rally in Paris.

Black Block activists have started riots at the demonstration, reports say. They have destroyed several bus stops, left graffiti on the walls, and broken shop windows. Due to the acts of violence, Greenpeace France and Youth For Climate have urged them to leave.

Over four million people in 161 countries have reportedly taken part in mass climate strikes across the world and demanded that their governments take urgent measures to save the environment.