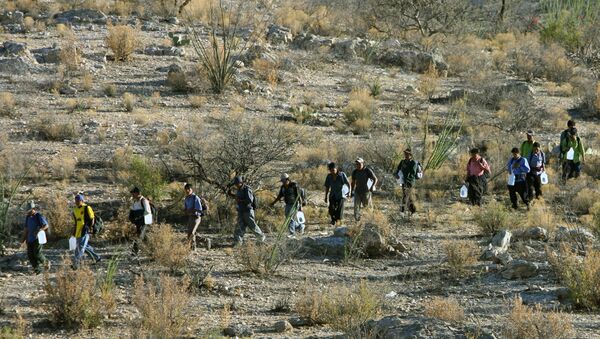 While the world was watching the meme-tastic raid on Area 51 in Nevada - which allegedly houses evidence of contact with aliens - following this summer’s social media craze, the Arizona desert became the site of an even greater trespass.

The Arizona branch of the US Customs and Border Protection agency has shared a clip showing dozens of people marching from Mexico to the US, who illegally crossed the border near the village called Sasabe. According to the agency, which stopped the group, the caravan was comprised of families and unaccompanied minors, and totalling 81 people. It took US authorities 33 man-hours to transport and process the people who illegally crossed the border.

A group of 81 people illegally crossed the border near Sasabe Tuesday. It took 33 man-hours to transport and process the group, comprised of family units and unaccompanied minors, at a nearby forward operating base. @CBP pic.twitter.com/OIUZWahfM9

​The crossing is said to have taken place earlier this week. It is unclear to which holding facility the migrants have been taken. Many border detention centres are said to be overcrowded and suffer from poor sanitary conditions. Acting CBP Commissioner John Sanders has earlier branded the situation at the Mexican border a “full-blown emergency”. According to the agency, although the flow decreased during the summer, the number of illegal border crossings is greater this year than in 2018. Since the beginning of the year, some 811,000 people have been detained.