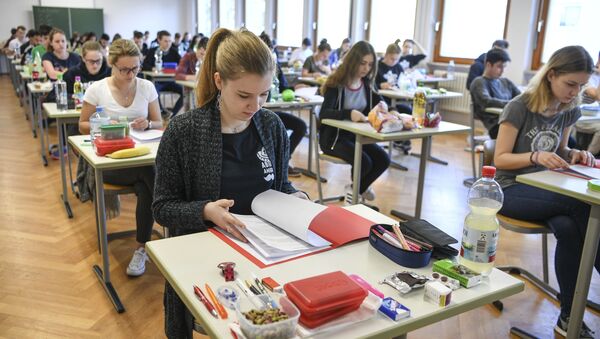 According to the German University Association, cited by Die Welt, the freedom of expression is becoming more and more limited, with a small, radical minority pressuring the majority to keep their opinions to themselves.

The German University Association (Deutsche Hochschulverband, or DHV) is warning that the very nature of the university is under attack in Germany, as a minority is trying to suppress the opinions of their opponents "with threats, s**tstorms, blockades and sometimes physical violence", rather than to refute them, according to its President Bernhard Kempen.

In the interview with Die Welt, he lamented that "the climate at universities is changing”.

“In the name of political correctness, there is an increasing attack on the nature of the university: on the freedom of research, thought and debate”, he said.

To illustrate his point of view, the German outlet shared a story of a student from the University of Cologne, Mario S., who complained about bias that he faced during a seminar about the notorious 2015 New Year's Eve mass sexual assaults in Cologne by migrants. Other students and the lecturer agreed that the background of the perpetrators was irrelevant and lambasted so-called "cultural racist" views, including Interior Minister Seehofer’s statement that although Muslims were a part of Germany, Islam was not. Mario S. said that he had disagreed, criticising the term "cultural racism", defending Seehofer's statement and insisting that the offenders’ origin "from a macho culture" had played a role. According to him, in response, he was bullied, insulted by co-students and advised to leave the seminar by the lecturer. Commenting on the issue, a university spokesperson confirmed that the institution is a "place of free speech", but declined to comment on the seminar in question specifically, referring to it as a one-time case.

According to the outlet, there have been numerous documented cases when professors have had to cancel research projects because of uproar from groups, or when discussions have only been able to take place under police protection, or when speakers have been protested against in the name of antifascism. Although the state government has upgraded the Higher Education Act with measures aimed at stopping those who restrict freedom of expression at universities, Die Welt points out that some actions, for example constant public pressure, are legal.

Kempen, who is also a Cologne lawyer, advocates for liberal courage to deal with the situation. He points out that the "large majority of the university management should simply have to overcome their comfort and cowardice”. The chairwoman of the local group Christian Democratic Students (RCDS), Anna Gericke, echoes his opinion and calls for the "university leaders to be guided not by fear but by the joy of passionate, even hard, but free discourse". Die Welt notes that both the university association and the Christian Democrats student group want to defend the right to speak out rather than any particular opinions that are facing criticism. According to them, the minority wishes to limit this right and often cites the "fight against the right-wing" as its goal.

Following letters from students and fellow professors, the university leadership initially forbade Schoenecker from financing the event with university funds. The speakers of discord also had to appear under police protection.

The DHV also insists that there should be a balanced representation of all political views, including the right-wing AfD and the left-wing Die Linke. Kempen cites as an example that while left-wing activists calling for violence were allowed to hold an event at the University of Cologne this summer, AfD university groups have been beaten off campus.