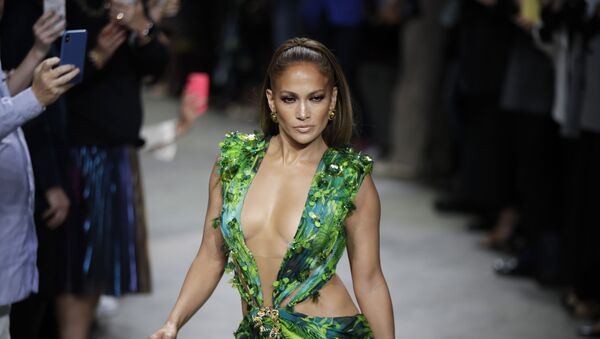 Jennifer Lopez charmed the internet and attendees of Milan Fashion Week in a green, jungle-print Versace gown – a similar version of the gown she wore to the 2000 Grammy Awards, which is often dubbed as the “first viral dress ever”.

"So this just happened," Lopez captioned a video of her catwalk at Versace's 2020 Spring collection which she shared on Instagram. She added the hashtags #stillgoingstrong and #20yearanniversary.

Lopez called her iconic green Versace gown her "biggest fashion moment ever," revealing on her YouTube channel in April that the look was pulled together at the last minute and almost didn't happen.

"Usually if you come to a fitting of mine there’s, like, tons of dresses," she said in the video. "But this day, the day of the Grammys, we really had a choice between two dresses. One was kind of like a white dress and the other was the Versace jungle-print dress."

The dress became a phenomenon, and Versace has revisited it more than once. Model Amber Valletta, who originally wore the green gown on the catwalk in 1999, walked the runway in a new version at Donatella Versace's New York fashion show last year in a tribute to J Lo.