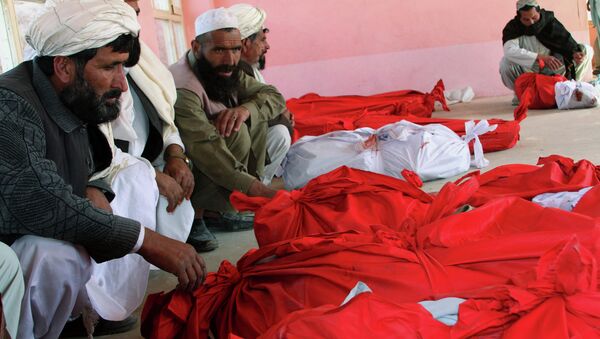 © AP Photo / Rahmatullah Nikzad
Subscribe
At least 30 Afghan civilian pine nut farmers were killed and at least 40 injured by US airstrikes Wednesday in the country’s deadliest bombing in months. US attacks on civilians happen “over and over again,” Brian Terrell, a longtime peace activist and co-coordinator of Voices for Creative Nonviolence, told Radio Sputnik’s Loud & Clear Friday.

“One of the things that’s heartbreaking about this - these are pine nut farmers,”Terrell told host Brian Becker.

“I [have] visited Afghanistan, and especially my young friends there, just like young people in our cities, it’s: ‘How do I make legitimate living?’ And while the war in Afghanistan these last 18 years has destroyed any legitimate economy, any industry, any agriculture, the one thing that has been able to flourish has been the opium trade. And how are people to make a living if pine farmers are in danger? It’s horrible.”

The attack, which was targeting a Daesh hideout, instead took the lives of civilian farmers who were collecting pine nuts in Wazir Tangi in Afghanistan's Nangarhar province, Reuters reported.

"Initial indications are members of Daesh were among those targeted in the strike," Colonel Sonny Leggett, a spokesperson for the US-led coalition in Afghanistan is quoted as saying by Al-Jazeera. "However, we are working with local officials to determine whether there was collateral damage."

The latest attack against civilians in Afghanistan is not an isolated incident, Terrell explained.

“This [has] happened over and over again. [Former US President Barack] Obama insisted the drone strikes happen when we face an imminent threat and only when there is near certainty of no civilian casualties. This is what they’ve said over and over again. It’s the same policies that have been going on for 18 years. It’s carelessness; it’s criminal carelessness. Often the media will express it as a failed attempt at nation building, and it’s not at all. It's been [the] very destruction of a society, and Americans have to realize that and come to terms with just exactly what we've done to Afghanistan and what we are continuing to do,” Terrell explained.

A United Nations report published last month found that US airstrikes were responsible for more deaths of Afghan civilians than Taliban attacks were.

“That was a crime most likely perpetrated from American soil … The admission that there was civilian casualties only comes when there’s tremendous pressure … [The Afghanistan war is an] attack on a people, and it should stop, and there should be reparations,” Terrell added.

Afghanistan has long been in a state of political turmoil, with the government unable to establish full control over the country's territory due to various terrorist factions, in particular the Taliban and Daesh. In 2017, with Afghanistan’s armed forces struggling to respond to terrorist attacks within the country, US President Donald Trump announced a resolution to send more troops to the war-torn state, while also appealing to NATO members to assist by deploying more of their service members to the war zone.

The Taliban and the US were trying to reach a peace deal that would include the withdrawal of foreign troops from Afghanistan and assurances from the Taliban that the country will not be used as a safe haven for terrorists. The US has long insisted that the Afghan government take part in the peace negotiations, but the Taliban considers the government a puppet of the US, and has repeatedly stated that it is the only stakeholder in Afghanistan that will deal with the US. However, earlier this month, Trump declared that the US peace talks with Taliban “are dead” after the group claimed responsibility for a car bomb explosion in Kabul that killed dozens of people, including an American soldier.

000000
Popular comments
What is every bodies problem here. They should know that Bombing and killing civilians, hospital, schools, wedding and funeral parties is the American military specialty. Remember when you dare to complain about that their "standard" reply always is that it is just acceptable collateral damage. They have done that in every other fabricated and illigal war they are in.