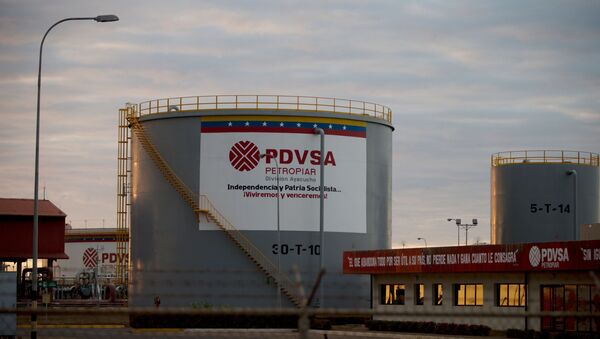 © AP Photo / Fernando Llano
Subscribe
CARACAS (Sputnik) - Venezuelan oil minister and the chief of Venezuela's national oil and natural gas company PDVSA, Manuel Quevedo, said on Friday that the PDVSA subsidiary petrochemical company Monomeros is at risk of being destroyed by the political opposition and called upon the international community to scrutinize this situation.

In March, the Venezuelan National Assembly, which is currently controlled by the opposition under Juan Guaido, has appointed its people to the board of national petrochemical companies of Petroquimica de Venezuela (Pequiven, subsidiary of PDVSA) and Monomeros Colombo Venezolanos (Colombian branch of Pequiven).

According to the minister, 130 employees were fired and one of the company's industrial facilities was shut down after a massive explosion took place there on Thursday. He is convinced that it all is part of Guaido's plan to destroy the company and sell it out by parts.

"We call upon the Venezuelan and international justice to investigate these actions which are, as I see it, of the most dishonest kind a Venezuelan and his foreign accomplices could commit," Quevedo added.

After the political crisis broke out in Venezuela in late January, the United States has imposed several rounds of sanctions against Venezuelan officials and entities and blocked $7 billion in assets belonging to PDVSA and its subsidiaries. Venezuelan President Nicolas Maduro has denounced the sanctions as an illegal attempt to seize the country’s sovereign assets.

000000
Popular comments
Why hasn't Venezuelan President Maduro placed a multi-million dollar reward on the head of Juan Guaido and key opposition figures, to bring them in alive if possible, machine gunned if not to stand trial and deported to Siberia or the Chinese desert gulags and labor camps?