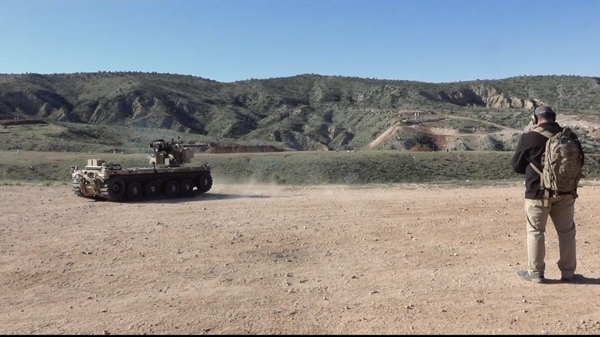 Amid a series of drone tests, the US Marines Corps (USMC) recently fitted one of its unmanned vehicles with a .50-caliber machine gun and additional body enhancements to improve its viability in urban environments.

The USMC’s Expeditionary Modular Autonomous Vehicle (EMAV) was recently deployed to the Muscatatuck Urban Training Center in Jennings County, Indiana, to test out its new frame and new weaponry.

Military.com notes that the USMC plans on testing rocket launchers on the autonomous ground vehicle, it is currently fitted with a .50-caliber machine gun that is mounted on the vehicle’s Common Remotely Operated Weapon Station (CROWS).

The CROWS, which is a mounting device with a “sensor suite and fire control software,” according to the US Army website, also supports grenade machine guns and other automatic weapons.

"The key idea is we are exploring how can we enhance the Marine's ability to execute his mission and give him some standoff ... and bring tools to the battle that he normally wouldn't be able to bring," ground combat element robotics engineer Dave Stone told Military.com during the Modern Day Marine 2019 expo. "This is bringing it down to the small-unit level, down to the squad level."

In order to assist the EMAV’s ability to navigate urban environments during times of conflict, the USMC also equipped the unmanned vehicle with a “pusher bar.”

"We are looking at, can that aid the Marines in clearing debris in and urban situation - bombed-out cars?" Stone explained to the outlet. "Can they move them out of their way?"

Though the USMC has not had much time with the EMAV prototype, the branch’s Warfighting Laboratory was able to fit it with a Switchblade multi-pack launcher made by the tech company AeroVironment, which is also known as the Lethal Miniature Aerial Missile System.

Final day @ModernDayMarine ! We are proud to have our Switchblade Multi-pack Launcher (MPL) displayed on an Expeditionary Modular Autonomous Vehicle (EMAV) in the Marine Warfighting Lab. Stop by our booth 1323 (Tent A) to learn more about the MPL. #MDM2018 #drones pic.twitter.com/EJPnUoPxS4

The 160-pound (73-kilogram) multi-pack device launches several loitering “kamikaze drone” munitions up to 6.2 miles and uses its quiet motors, GPS tracking and video capabilities to deliver a reportedly lethal blow to the enemy.

“It can sit out there in the environment for a long time,” AeroVironment VP Brett Hush told National Defense.

Stone also informed Military.com that the 16-gallon tank autonomous ground vehicle can travel up to 50 miles and reach a top speed of 10 mph in “semi-autonomous mode” and “remote-control mode.” The EMAV can also haul a payload of 7,000 pounds.

"It has follow-me mode, and it also has a waypoint navigation system," he claimed. "It will detect obstacles and avoid them, so if somebody walks in the path of it, it will slow down and go around."