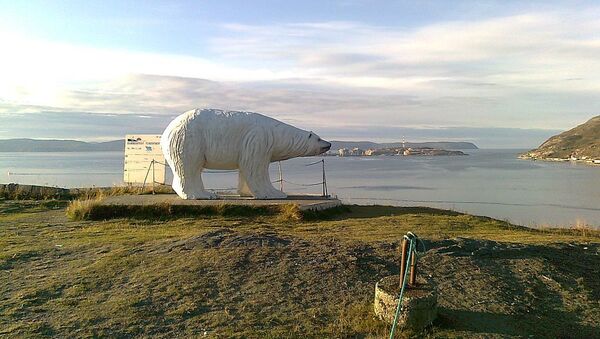 CC BY-SA 3.0 / Jack globetrotter / Hammerfest,Norway
Subscribe
The polar bear statue, the beloved landmark of the town of Hammerfest in northern Norway, disappeared after a storm that hit Hammerfest in December 2016. Now it's back, and the locals are not impressed.

The return of the polar bear, the mascot of the Norwegian town of Hammerfest, after several years of absence has triggered mixed reactions.

The statue at the gateway to Hammerfest has been greeting locals and numerous visitors since 1993, but was badly damaged in a storm that hit Hammerfest in December 2016 and was taken down. Among the “injuries” that had to be fixed were new teeth and new claws.

However the “doctors” went a little too far in their desire to fix the colouring of the the bear's muzzle and overdid their part.

The locals were quick to point this out.

“We are glad that he is back, but indeed he looks a bit different after his spa treatment”, a local tourist portal smirked.

“Has the polar bear in Hammerfest eaten soot? Or just slightly overzealous with the makeup?” a local inquired, posting a photo of the bear's new look.

Another explanation for the bear's unconventional look is that it was “straight from rehab”.

“Chinese playboy admits fatherhood to Hammerfest bear”, yet another quick wit pointed out the bear's striking similarities with a panda.

Even less becoming explanations for the bear's somewhat tormented expression included that the bear was about to take a dump.

“Two years of restoration of 'the tourist magnet, made of foam rubber, isopore and fiberglass'”, another user scoffed on Twitter.

​Bilskade and Lakk Hammerfest, the local company that was responsible for the polar bear's facelift, stressed that that the extra black colouring was not part of the original plan.

“It has gotten darker since we delivered it. The owner wanted more colouring on the muzzle and around the eyes, but it seems that it went too far. We have been in contact with the owner and said we can help him get it nicer”, manager Krister Sørnes told national broadcaster NRK.

Now that the bear already undergone the first round of a tone-down, some locals believe it should be left “as is” since it already has become a cult figure.

Hammerfest has a population of 10,000 and claims to be the northernmost city in the world, although this is disputed. It is home to the Polar Bear Museum and has one on its flag and coat of arms.