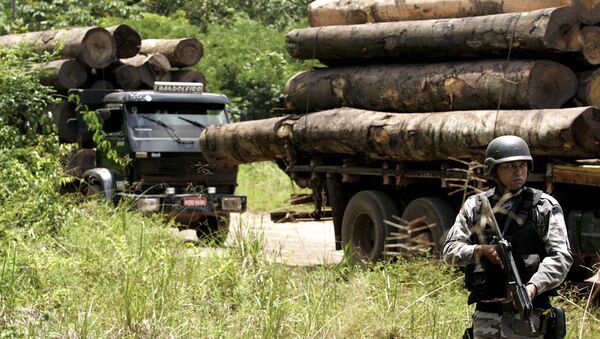 Tim Korso
All materials
Brazilian President Jair Bolsonaro has recently been facing harsh pressure from some foreign states over his alleged inability to cope with raging forest fires in the Amazon. Bolsonaro has dismissed such claims and warned foreign governments against meddling in Brazil's internal affairs.

The so-called "Baron of Rio Branco Project", allegedly aimed at boosting Brazil's industrial push into the Amazon rainforest, seeks not only to boost the country's economy, but also to give a long-sought opportunity for the military to establish a presence there, The Intercept media outlet reported, citing documents obtained from an anonymous source.

The documents, which include a file of a presentation and an audio recording, were taken from a closed meeting between the country's Special Secretariat for Strategic Affairs and local leaders and businesspeople from the northern Brazilian state of Pará in April 2019. The presentation itself was held to justify the implementation of the alleged "Rio Branco Project". 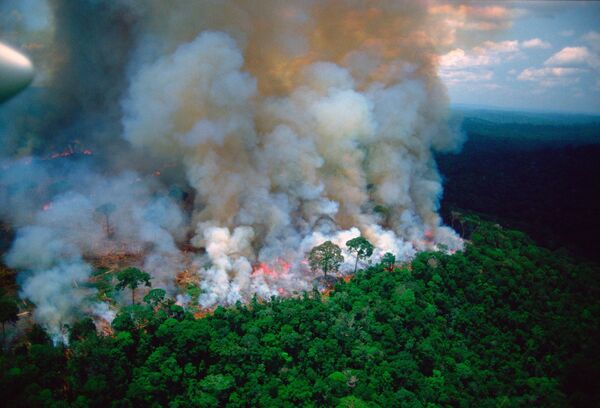 The photo of thick plumes of smoke billowing from fires the Amazon forest, shared by French President Emmanuel Macron, apepars to have been taken by a photographer who died in 2003, which means that the photo is 16 years old at the very least.
© Photo : Twitter/Emmanuel Macron

According to the documents, the Brazilian government hopes to make the Amazon region give 50% of the country's GDP as opposed to current numbers, which are around 8%. The economic development and industrialisation of the forest will also give the Brazilian military the opportunity to "occupy" the Amazon rainforest, as The Intercept describes it, citing the leaked documents without delving into details.

Historically, the country's armed forces have seen the Amazon rainforest, poorly inhabited mainly by the indigenous population, as a potential security threat, arguing that invasion forces might use it as a foothold. The Intercept reported that according to the obtained audio recording, Brazil's Secretary of Strategic Affairs, Maynard Marques de Santa Rosa, expressed concern that Chinese immigration into neighbouring Suriname could be the modern-day potential threat to the country. Suriname has indeed recently faced an influx of both Chinese migrants and investments. 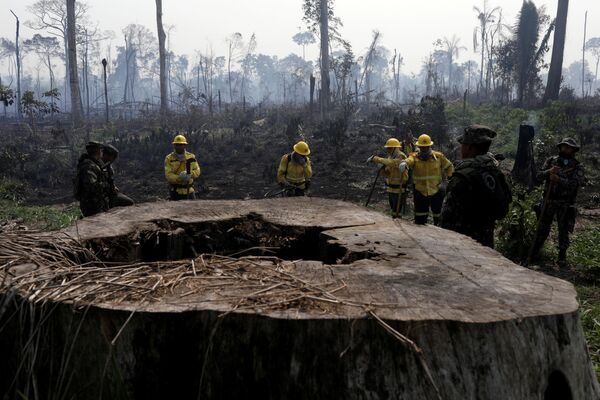 Brazilian firefighters and soldiers are pictured on a burning tract of the Amazon forest as it is cleared by farmers, in Rio Pardo, Rondonia, Brazil September 16, 2019
© REUTERS / RICARDO MORAES

The report comes amid criticism of Brazil's handling of this year's Amazon wildfires, with some foreign heads of government calling on President Jair Bolsonaro to apply more effort. Bolsonaro has dismissed the criticism, expressing the opinion that at least some of the fires were started by the environmentalist NGOs criticising the country's forest policies. He also warned foreign countries from trying to meddle in how Brazil handles the wildfires, while adding that the country is ready to receive international aid, if that demand is met.