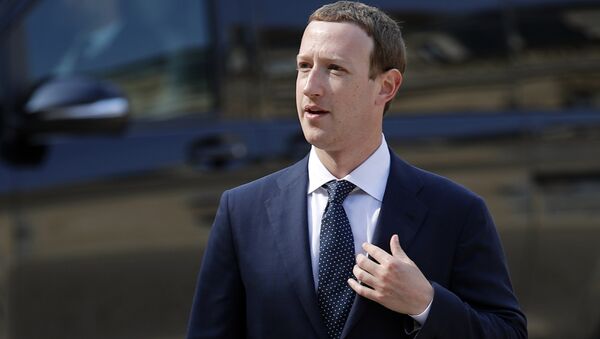 © AP Photo / Francois Mori
Subscribe
Lilia Dergacheva
All materialsWrite to the author
The social media mogul travelled to Washington on Thursday for private talks with POTUS and senior lawmakers, with most discussions held behind closed doors, while new legislation on digital security and online privacy is in the making.

Facebook co-founder and CEO Mark Zuckerberg met Thursday with President Donald Trump and a number of members of Congress, as Facebook has taken the path of resolving its regulatory and legal issues centering around competition, censorship, reported bias, etc.

While the president reviewed the get-together as "a nice meeting" without giving any further details, Republican Senator Josh Hawley in a nutshell shared what the talk was about.

Hawley tweeted after his one-on-one meeting with Zuckerberg that he "challenged him to do two things to show that Facebook is serious about bias, privacy and competition".

Just finished meeting w @facebook CEO Mark Zuckerberg. Had a frank conversation. Challenged him to do two things to show FB is serious about bias, privacy & competition. 1) Sell WhatsApp & Instagram 2) Submit to independent, third-party audit on censorship. He said no to both

The senator suggested Zuckerberg sell messaging app WhatsApp and photo-sharing service Instagram, which are among over 70 companies the 2.5 billion-user social media giant acquired in the not so distant past, "to prove you're serious about protecting data privacy", citing Zuckerberg as responding to him "it wasn't a good idea" as part of their "frank" exchange.

The acquisition of dozens of new structures under Facebook’s umbrella has long sparked concerns over its ability to not only process massive amounts of personal data with sufficient discretion, but also effectively stand on guard of users’ privacy.

In response, US federal and state antitrust agencies are exploring anti-competitive actions potentially committed by Facebook and members of Congress are currently working on comprehensive privacy legislation that could lead to a lesser market monopolisation of companies like Facebook, Google, Amazon, and Apple and prevent them from making fortunes off users' personal data.

Facebook has been deeply embroiled in a series of user privacy scandals over the past couple of years, with ethical questions arising on how the balance between the company’s market interests and those of a vast client audience can be struck. After a number of Senate hearings on the matter, the US Federal Trade Commission hit Zuckerberg’s brainchild with a hefty fine of $5 billion (€ 4.5 billion) for data protection violations, purported to be over the Cambridge Analytica data scandal.

The settlement essentially called for more advanced privacy controls and more effective oversight of the social network. In one of the most recent developments to this end, Facebook announced a plan to create an independent 40-strong "oversight" board, dubbed the “Facebook supreme court", to make decisions over how the network is moderated and what content is allowed on the platform. The move closely follows accusations of Facebook having overlooked a live stream showing the New Zealand mosque shootings in March that left 51 dead.