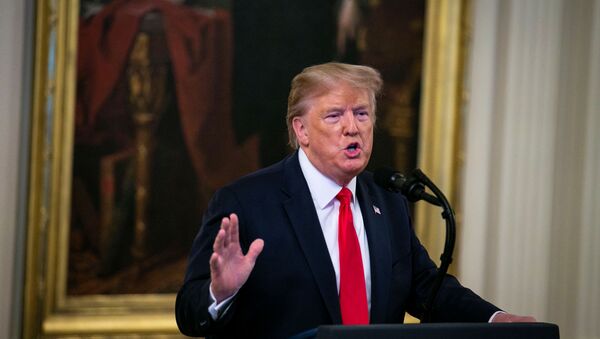 The details of a whistleblower complaint reported by The Washington Post described as an unspecified "promise" by US President Donald Trump to a foreign leader remain unknown, however, two people familiar with the matter told the outlet that the promise involved Ukraine.

Two and a half weeks before the complaint was filed, Trump spoke with Ukrainian President Volodymyr Zelensky, an ex-comedian and political newcomer who was elected in May. The call is already under investigation by House Democrats about allegations of whether Trump and his attorney Rudolph W. Giuliani tried “to coerce the Ukrainian government into pursuing two politically-motivated investigations under the guise of anti-corruption activity” — one to help Trump’s former campaign chairman Paul Manafort, who is in prison for illegal lobbying and financial fraud, and a second to target the son of former Vice President Joe Biden, who is now seeking the Democratic nomination to challenge Trump. Lawmakers have demanded a full transcript and a list of participants on the call.

“As the 2020 election draws closer, President Trump and his personal attorney appear to have increased pressure on the Ukrainian government and its justice system in service of President Trump’s re-election campaign, and the White House and the State Department may be abetting this scheme", the chairmen of the House Intelligence, Foreign Affairs and Oversight committees wrote, citing media reports that Trump had threatened to withhold $250 million in aid to Ukraine.

Giuliani dismissed the reports of the whistleblower and Trump’s “promise” to a foreign leader.

Trump also dismissed the reports about the whistleblower complaint, calling it "presidential harrasment".

....Knowing all of this, is anybody dumb enough to believe that I would say something inappropriate with a foreign leader while on such a potentially “heavily populated” call. I would only do what is right anyway, and only do good for the USA!

The complaint has triggered a showdown with Congress, following Acting Director of National Intelligence (DNI) Joseph Maguire's refusal to share details of it with lawmakers.

Those lawmakers pressed intelligence community Inspector General Michael Atkinson for details during Thursday’s closed-door testimony before the House Intelligence Committee. The Associated Press reported, though, that he would not discuss the substance of the complaint.

“He was being excruciatingly careful about the language he used", the person familiar with the matter told The Washington Post.

Atkinson made clear that he disagreed with a lawyer for the Office of the Director of National Intelligence, who had contradicted the inspector general and found that the whistleblower complaint did not meet the statutory definition of urgent concern because it didn't involve a matter under the DNI’s jurisdiction.

After the testimony, Intelligence Committee Chairman Adam Schiff (D-Calif.), voiced concerns about not having access to the information, warning that Congress could use legal action or budgetary powers as leverage.

"What’s at stake here goes well beyond this complaint and this president," he said.

Schiff also released letters from the inspector general that revealed the watchdog considered the complaint “credible".

The letters revealed the office was "at an impasse" with the director of national intelligence over disclosure. Atkinson wrote that the DNI, “after consulting with the Department of Justice", determined the complaint by law did not have to be shared with the intelligence committees. He wrote that he would "abide by that determination", but disagreed with it.

Schiff subpoenaed Maguire, saying he was withholding a whistleblower complaint from Congress and questioned whether the White House or Attorney General Bill Barr had directed him to do so. Maguire is scheduled to testify before the Intelligence Committee in a public session next Thursday.

"This is a clear example of someone from the Deep State ... from the intelligence community", Whitaker said on "The Story with Martha MacCallum". "It was completely overblown. ... It will be a big nothing burger".

He called the incident an example of “outrageous conduct".