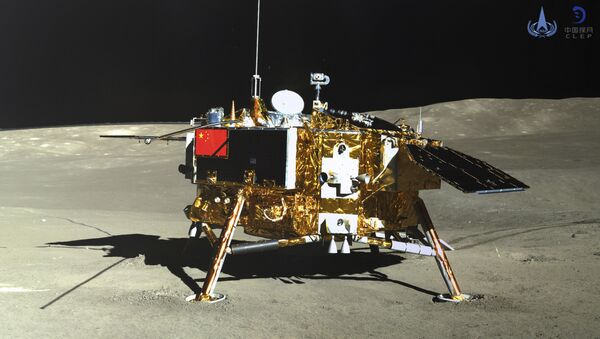 The Chinese-language science outreach publication Our Space, which announced the findings on August 17, used the term "胶状物" (jiao zhuang wu), which can be translated as "gel-like," Space.com reported. This notion sparked wide interest and speculation among lunar scientists. Along with new images of the stuff on the moon, the post released over the weekend by Chinese-language science outreach publication Our Space via its WeChat social media account details how the Yutu-2 team carefully approached the crater in order to analyze the specimen, despite risks.

One of the images shows two of the rover's six wheels and the contents of an approximately 7-foot-wide (2 meters) crater. The green, rectangular area and red circle within are suspected to be related to the field of view of the Visible and Near-Infrared Spectrometer (VNIS) instrument, rather than the subject matter itself, according to some lunar scientists.

After obtaining the first set of data that VIRS, one of Yutu-2's four science payloads, collected at the crater in July, the Yutu-2 team deemed it to be unsatisfactory due to shadows, so the team members attempted a second approach and measurement during the following lunar day in August. According to Our Space, satisfactory detection was made — but the results were not released.

Clive Neal, a lunar scientist at the University of Notre Dame, told Space.com that while the image is not great, it may still give clues to the nature of the material. According to Neal, the material highlighted in the centre of the crater resembles a sample of impact glass found during the Apollo 17 mission in 1972. Sample 70019 was collected by astronaut Harrison Schmitt, a trained geologist, from a fresh crater 10 feet (3 meters) in diameter, similar to that approached by Yutu-2.

Neal describes 70019 as being made of dark, coherent microbrecci, which are made of broken fragments of minerals cemented together - and black, shiny glass. "I think we have an example here of what Yutu-2 saw," Neal said.

Such materials could exist after high-speed impacts on the lunar surface, which tend to melt and redistribute rock across the craters they make and can create glassy, igneous rocks and crystalline structures.

Dan Moriarty, NASA Postdoctoral Program Fellow at the Goddard Space Flight Center in Greenbelt, Maryland, also said that it is hard to make a definitive assessment of the substance's chemical composition, outlining that the material appears somewhat brighter than the surrounding materials, though the actual brightness is hard to confirm from the photographs.

"Chang'e-4 landed in a mare basalt-filled crater, which is typically dark," Moriarty said. "Highlands crustal materials are typically brighter, so that would be a potential candidate. It will be very interesting to see what the spectrometer sees, and if any higher-resolution images become available," Moriarty notes.

Chang'e-3's Yutu rover carried an alpha particle X-ray spectrometer for analyzing chemical composition, mounted on a robotic arm, which would be very useful for identifying such specimens. Yutu-2 instead carries the new Advanced Small Analyzer for Neutrals (ASAN), a payload from Sweden for studying how solar winds interact with the lunar surface. The Chang'e-4 lander and Yutu-2 completed the ninth lunar day of their mission on September 5, powering down around 24 hours ahead of local sunset. Lunar day 10 will begin around September 22 for Yutu-2 and September 23 for the lander.