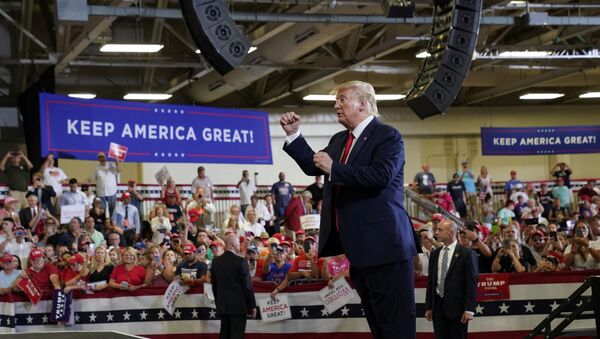 © REUTERS / KEVIN LAMARQUE
Subscribe
While travelling back from his three-day working trip to California, the president argued that the image of San Francisco has long since changed, calling out the environmental state of the city. However, the mayor hit back, arguing there are no pressing ecological issues and stressing the city’s fight for residents’ wellbeing is in full throttle.

President Donald Trump warned San Francisco late on Wednesday that his administration would in the near future issue an environmental notice to the city, arguing that it is poorly handling what he referred to as the homelessness issue.

While on board Air Force One on his way back to Washington, DC from a trip to California and New Mexico, the president addressed reporters, stating that San Francisco was in “total violation” of environmental rules, specifically bringing up used needles that he said were ending up in the ocean, unable to get filtered out due to waste piling up in storm sewers.

“They have to clean it up. We can’t have our cities going to hell".

The comments naturally saw the mayor of San Francisco, a predominantly Democratic city, weigh in, branding the notification "ridiculous".

Mayor London Breed retorted by mentioning that "one of the best" filter systems used in the city is to prevent debris from polluting the waters off the Californian coast.

“To be clear, San Francisco has a combined sewer system, one of the best and most effective in the country, that ensures that all debris that flow into storm drains are filtered out at the city’s wastewater treatment plants", Ms Breed said in a statement on Wednesday night. “No debris flow out into the bay or the ocean”.

She also addressed the homelessness issue, asserting that the city intends to come up with 1,000 additional shelter beds by next year and is seeking to pass a $600 million bond to provide more affordable lodging and expand services for people with mental illnesses and drug issues.

“In San Francisco”, Ms Breed started off, “we are focused on advancing solutions to meet the challenges on our streets, not throwing off ridiculous assertions as we board an airplane to leave the state”, she said in a swipe at Trump’s remarks.

This is by far not the first time that the debate has centred on the homeless: recently, in July, the president took a dig at House Speaker Nancy Pelosi, whose district includes San Francisco, saying that the city was “not even recognisable lately" and explicitly calling on Democrats to take steps.

“Something must be done before it is too late", he added. “The Dems should stop wasting time on the Witch Hunt Hoax and start focusing on our Country!”

Separately, while speaking to Tucker Carlson on Fox News, Trump lamented the state of American cities like San Francisco, Los Angeles, and New York, suggesting that homelessness and drug use are such urgent issues that these have become a public health hazard.

“You can’t have what’s happening — where police officers are getting sick just by walking the beat", the president told Mr Carlson. “I mean, they’re getting actually very sick, where people are getting sick, where the people living there living in hell, too", Trump rounded off. He also mentioned foreign leaders often driving around the megalopolises, implying that the way the streets look reflects today’s American reality:

“They’re riding down a highway, they can’t be looking at that", he said. “I really believe that it hurts our country”.

The White House indicated earlier that the federal government would oversee the homelessness issue, with several agencies reportedly having been tasked with looking for ways to sort it out.