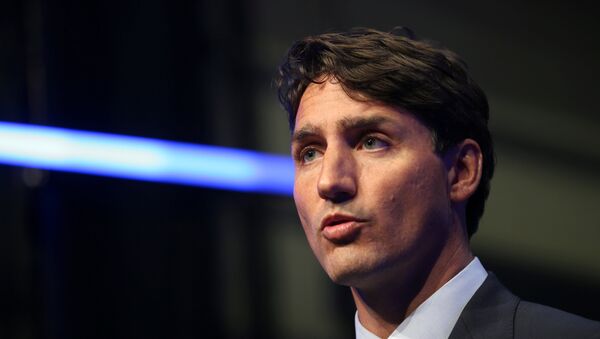 In a photo exclusively obtained by TIME magazine, Canadian Prime Minister Justin Trudeau is seen wearing brownface makeup to a 2001 party at a private school where he was a teacher.

Brown or blackface refers to makeup used by white people to typically perform stereotypes of black, South Asian or Latin American people. It was used by white performers in 19th century America in minstrel shows - an American form of entertainment - to ridicule blacks.

According to TIME, the photo of Trudeau was taken at an “Arabian Nights” themed gala and was published in the 2000 - 2001 yearbook of West Point Grey Academy, located in Vancouver, Canada, where Trudeau was a French and math teacher at the time.

​In the photo, Trudeau is seen wearing a turban and robes. Brown makeup is smeared on his face, neck and hands. The photo was obtained by TIME from Vancouver businessman Michael Adamson, who was a member of the West Point Grey Academy community, according to TIME. Adamson claims he was not at the party. He first saw the photograph in July and “felt it should be made public,” TIME reports.

Zita Astravas, the media relations lead of Trudeau’s Liberal Party of Canada, confirmed that Trudeau is pictured in the photo.

“It was a photo taken while he was teaching in Vancouver, at the school’s annual dinner which had a costume theme of ‘Arabian Nights.’ He attended with friends and colleagues dressed as a character from ‘Aladdin,’” Astravas told TIME, also noting that Trudeau plans to make a statement to the media regarding the photo Wednesday evening.

According to TIME, Trudeau’s official director of communications did not respond to the outlet’s “multiple calls.”

TIME also contacted three out of four women pictured in the photo with Trudeau, along with others who were at the academy’s spring gala in 2001. One staff member refused to provide a comment, while others said they had no recollection of Trudeau at the party. Two other people said they were aware of the photo, which had been discussed amongst West Point Grey community members.

“Any time we hear examples of brownface or blackface it's ... making a mockery of someone for what they lived and what their lived experiences are … Racism is real. People in this room have felt it. I’ve heard the stories, I’ve experienced it in my life,” Singh said.

​On Wednesday evening, Trudeau apologized for wearing brownface makeup at the 2001 party.

“I shouldn’t have done that. I should have known better but I didn’t and I’m really sorry,” Trudeau told reporters, according to CTV News. “It was a dumb thing to do. I’m disappointed in myself, I’m pissed off at myself.”

This is not the first time that Trudeau has caught flack for his racial insensitivity. Last year, Trudeau, his wife and their kids were all criticized for wearing Indian garb on a trip to India. He has also been criticized by First Nations artists for wearing a tattoo mimicking one of their designs.

​The latest news also comes as Trudeau finds himself embroiled in a political scandal. The Canadian engineering giant SNC-Lavalin is facing accusations that its former executives paid millions of dollars in bribes to win contracts in Libya under Muammar Gaddafi's rule. In particular, the company is accused of paying nearly $48 million to public officials in Libya between 2001 and 2011 to influence government decisions, Sputnik reported.