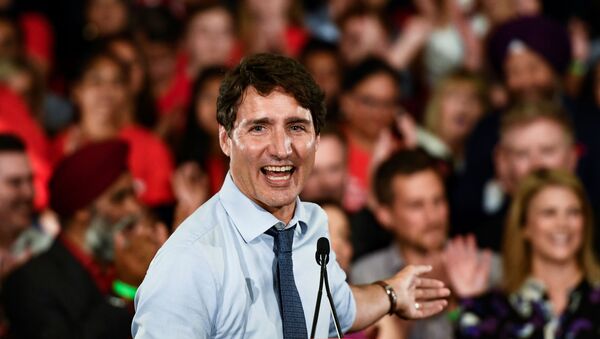 The photo of Canadian PM Justin Trudeau posing with brownface makeup during a school party in 2001 has recently been obtained and revealed by TIME magazine, causing a backlash from the public due to “racist” claims.

Canadian Prime Minister Justin Trudeau has recently been compelled to offer his apologies to the public, after a 2001 photo where he was pictured wearing a brownface mask during a party at West Point Grey Academy where he was working as a teacher was obtained and revealed by TIME magazine reporter Anna Kambhampaty.

In the photo Trudeau is wearing a turban and robes, with his face, neck and hands covered in brown makeup. According to Trudeau’s Liberal Party spokesperson Zita Astravas, the picture was taken during the academy’s spring gala with a costume theme “Arabian Nights” back in 2001, where Canadian PM was depicting the character of Aladdin.

Brown or blackface is often considered to be offensive to black, South Asian or Latin American communities for advancing stereotypes and ridiculing non-white culture. The finding even forced Trudeau to offer his apologies to the public, as he admitted he was “disappointed” in himself for doing the makeup.

“I shouldn’t have done that. I should have known better but I didn’t and I’m really sorry. It was a dumb thing to do", Trudeau told reporters, according to CTV News.

Many netizens however, did not see a “big issue” in Trudeau’s brownface picture, with the most common replies to the TIME reporter's Twitter revelation being “so what” or “who cares”.

Is he running for prez in us now? Then who cares.

We have way too many problems with our president to care about Canada’s and what he did over a decade or more ago.

However, Canadian member of Provincial Parliament Laura Mae Lindo found the picture to be an important issue with regard to anti-racist strategies in Canada, especially considering the fact that Trudeau was himself a French and Math teacher at the Academy at the time the photo was taken.

Message from your friendly anti-racism critic:

Some of Lindo’s followers shared her concern, with some, however, arguing that the picture should not be considered a big issue.

Speaking as a brown-skinned Arab Canadian, this neither vexes nor antagonises me or any of my kin. The truth remains, @JustinTrudeau 's many faults do not include racism. He may pander to powers that be at the expense of others but his actions clearly label him as diversity safe.

It's actually brownface. And as someone who has been brown-facing his whole life, I can tell you none of my brownface kin will care.