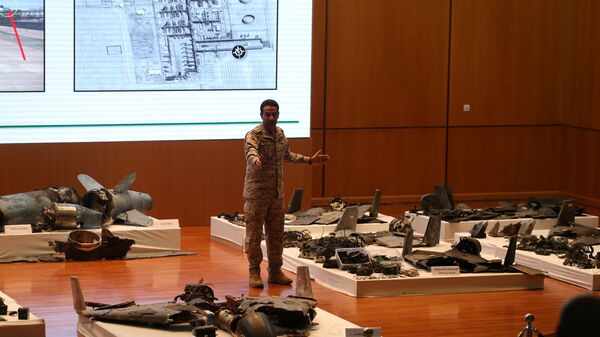 The day before, the Saudi Defence Ministry organised a news conference to show journalists what it described as an Iranian cruise missile and Delta Wing unmanned aerial vehicles (UAV).

Commenting on a recent presentation by Saudi Arabia of the alleged proof that Tehran was behind a recent attack on Saudi oil facilities, the Iranian Foreign Ministry stated that it needs to see the so-called proof itself.

"As for the attack on Aramco oil facilities, if they have actual proof of Iran's complicity, let them show that," the Iranian Foreign Ministry's Spokesman Abbas Mousavi told the Al Alam broadcaster.

Last Saturday, Saudi Aramco had to close two of its facilities after they were hit by drones and then caught fire. The incident led to a cut in oil production totalling 5.7 million barrels per day — about half of Saudi Arabia’s daily oil output.

In the most recent development of the events, the Saudi Defence Ministry showed on Wednesday what it described as an Iranian cruise missile and Delta Wing unmanned aerial vehicles (UAV).

However, before the so-called proofs were made public, US Secretary of State Mike Pompeo put the blame for the attack on Iran.

Later on, US President Donald Trump said during a meeting with Bahrain’s Crown Prince Salman bin Hamad Al-Khalifa that based on evidence he'd seen, it appears as though Iran was responsible for the attack.