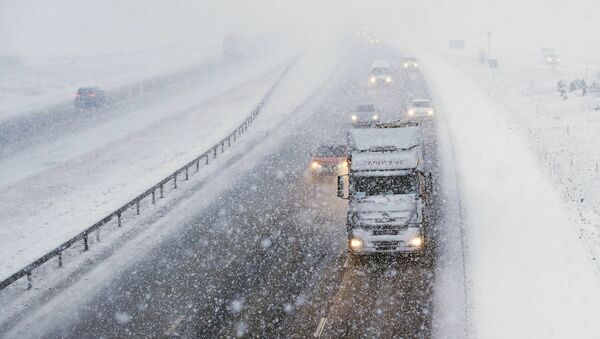 Chris Summers
All materialsWrite to the author
Britain opened its first “smart motorway” in 2006 and they are gradually being rolled out across England. Sputnik spoke to Edmund King, the President of the Automobile Association (AA), about the dangers posed by smart motorways.

The UK government is planning to double the smart motorway network from 416 to 786 miles and says it is helping to cut traffic congestion, which costs the economy an estimated £2 billion a year.

But one woman is suing Highways England, a government agency, after her husband and another man were killed in an accident on the M1 motorway in June this year.

Three other people have been killed on the same 16-mile stretch of smart motorway, between Nottingham and Sheffield, and experts are calling on the government to rethink the policy.

​But what is a smart motorway?

The Department of Transport has dug up hundreds of miles of traditional motorway, buried sensors under the road and relaid them, removing the hard shoulder and replacing it with occasional laybys.

But Edmund King, President of the AA, said: “The first smart motorway was the M42 in the West Midlands where the laybys were between 400 and 600 metres apart and the gantries about the same distance. You could literally see the next layby and even if you had a flat tyre or smoke was coming out of your engine you could make it to the next layby. But then the Department of Transport and Highways England changed the design and laybys are now every one and a half mile instead of 600 metres. They have totally changed the goalposts.”

Highways England say smart motorways are no less safe than traditional motorways but Mr King says he fears this is because they were using data from the M25 - the orbital road around London, which is always congested.

Smart Motorways - the irony. Not smart at all. They are killers. It’s time that a major u-turn was made on this. There will be a major tragedy at some point. Multiple fatal accident waiting to happen. Then there will be a rethink #highwaysengland

​“One could argue the M25 is not the ideal case study because it’s always busy, even at night. The fatalities have tended to be on stretches of less used motorways and at night,” Mr King said.

He said: “In those cases a car has broken down in a live lane, the authorities have not spotted it and there is no red X on the gantry and a vehicle has gone into the stationary car.”

Jason Mercer, 44, and Alexandru Murgeanu, 22, were killed by a lorry after they stopped to exchange insurance details in the dark on the M1 near Sheffield.

“I am really afraid that unless safety issues regarding smart motorways are reviewed more families may lose loved ones. The British government must do something to ensure people are safe if they are going to continue to build them.”

Smart motorways 'more dangerous' than regular motorways https://t.co/KphDmFvHrq - Was on smart motorways in the midlands yesterday, no-one was using the "hard shoulder" lane, for good reason! A failed experiment that Highways England should admit to.

She said: "Highways England failed in their duty of care to my husband and several other people and I'm encouraging others to take the same path as me. I want the whole system stopping with immediate effect while independent bodies analyse the facts."

Last year a Polish truck driver was jailed for 14 years for his role in a horrific motorway crash on the M1 north of London, which killed eight people.

Ryszard Masierak was drunk when he fell asleep at the wheel of his truck in the inside lane of the M1, ploughing into a minibus which was on its way to Disneyland Paris.

This is why smart motorways are so dangerous with nowhere to go after a breakdown and being stuck in a live lane.#smartmotorway#deathtraps https://t.co/4n08DHPLKy

​Pete Williams, the RAC’s road safety spokesman, said at the time if that stretch of the M1 had been a "smart motorway" the red X sign would have warned traffic of the obstacle in the inside lane.

But Mr King said he fears for the safety of passengers and mechanics when vehicles break down in the “live lanes” of a smart motorway because they are unable to get to the next layby because it is too far away.

He said AA personnel have been told not to risk their safety if a vehicle is in a live lane and there is no red X on the gantry warning of the obstacle.

This will only bring outrage to people who speed or ignor the big red X. Smart motorways are safe if people, follow the signs illuminated. Granted they could be refined for speeds but

​“Our advice to people stuck in their cars on a live lane is to keep your seatbelt on, put all your lights on and dial 999,” Mr King said.

He said he believed the design of smart motorways was inherently dangerous and he said: “I don’t care what their stats show, I know that if I am broken down I want to get out of a live lane. You just have to hear the fear in the voice of the AA men who are dealing with these incidents, when you have the children crying in the background.”

​Mr King said he doubted smart motorways were even cutting down on the congestion that was promised.

“Evidence shows that 30 percent of drivers do not use the inside lane on smart motorways when they are allowed to because they scared of coming across a broken down vehicle, so are we really getting the congestion benefits we were promised?” he asked.

He also pointed out that when there is a major accident on a smart motorway it was much harder for emergency vehicles to reach the scene because the hard shoulder - which they would have used on a traditional motorway - did not exist and the inside lane was congested.

England’s Chief Highway Engineer Mike Wilson responded by saying “motorways in this country are among the very safest roads in the world.”

Mr Wilson said: “Highways England would never carry out a major improvement scheme without being confident that we would maintain or enhance this position. Evidence indicates that smart motorways are helping to improve safety. The first nine of the latest generation of smart motorways have reduced casualty rates by more than 25 percent. Smart motorways are good for drivers, adding vital extra lanes to some of our busiest motorways and making journeys safer and more reliable. As with other roads, we monitor the safety performance of smart motorways and are rolling out enhancements to improve the road user experience."