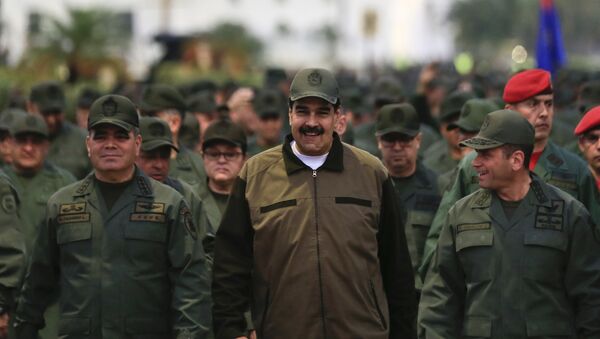 On Tuesday, the US Department of State said that Washington and its allies in the Western hemisphere had invoked the Inter-American Treaty of Reciprocal Assistance (TIAR) against Venezuela after the suspension of talks between Caracas and the US-backed opposition leader and self-proclaimed president of Venezuela, Juan Guaido.

"The Venezuela Armed Forces categorically reject the illegal activation of the Inter-American Treaty of Reciprocal Assistance by the Organization of American States against Venezuela. This is an unreasonable provocation aimed at legalizing a military invasion in order to overthrow the legitimate government of Nicolas Maduro," the Defenсe Ministry said.

According to the statement, these actions shed light on the true instigators of the destabilization of the situation in the region.

"They are seeking to use this mechanism of intervention in order to strengthen their aggression campaign, which, along with the immoral financial and economic blockade, also prescribes the use force ... Such an outcome will have fatal consequences for entire South America," the ministry said.

The TIAR agreement, commonly known as the Rio Pact, was signed in Rio de Janeiro by the majority of American states in 1947. In essence, this is a mutual defence treaty, since its main principle states that an attack on any country among the signatories will mean an attack on all participating countries. Venezuela and other states of the Bolivarian Alliance for the Peoples of Our America left the treaty in 2012.

Venezuela faces a US-led effort to oust the government of Maduro and replace him with opposition leader and a self-proclaimed president Guaido. The United States has imposed comprehensive sanctions against Venezuela and frozen some of the country’s assets.

Maduro has called Guaido a US puppet and accused the United States of orchestrating a coup to effect a forced change in government in Venezuela and claim the country’s resources.