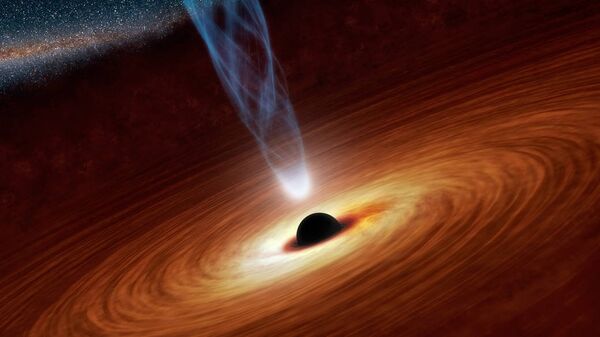 Einstein didn’t single out any distinguishing characteristics of black holes other than their mass and spin, and the approach seems to be largely accurate, although leaving some room for scientific contemplation whether there could be something at least slightly "hairy" in the insatiable cosmic void.

Reverberations in space time caused by the merging of two black holes into one suggests that Einstein was perhaps right to predict in his general theory of relativity that black holes have no distinguishing features aside from mass and the rate at which they spin. In other words, the behemoths have been found to be "hairless", per a new report published in the 13 September Physical Review Letters.

In the aftermath of that collapse, the newly formed big black hole went through a period of “ringdown” as it oscillated for several milliseconds, releasing gravitational waves, similar to the way a struck bell vibrates before the sounds eventually die away.

Reverberating black holes emit gravitational waves not at a single frequency, but with additional, short-lived overtones — much like a bell rings with multiple tones in addition to its main pitch.

By measuring the ringing black hole’s main frequency as well as its overtone, the researchers managed to bring together those waves with the prediction for a hairless black hole, with the results matching to within 20 percent.

However, there is certainly a possibility of the no-hair theorem being proven wrong. Yet, “[i]t’s a clear demonstration that the method works”, says physicist Leo Stein of the University of Mississippi in Oxford, Mississippi, sharing the hope that the precision will "increase as LIGO improves".

Meanwhile, there could actually be some "hair" found on top of the black holes upon closer examination. If it happens, this might eventually lead to a solution to the so-called information paradox, shedding some light on what happens to information that ends up sucked into a black hole.

For instance, in a 2016 attempt to resolve the paradox, physicist Stephen Hawking and his colleagues suggested that black holes might feature “soft hair”, if the no-hair theorem proves wrong.

Black holes have long stunned viewers, both professional and budding astronomers alike, with their build-up and activity raising more and more questions. In a recent breakthrough development, researchers used a whole network of high-tech telescopes to arrive at the first ever close-up picture of a supermassive black hole, with further ventures announced to include making a set of real-time black hole movies.