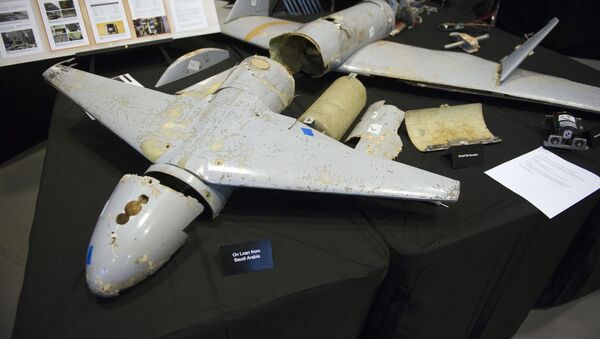 © AP Photo / Cliff Owen
Subscribe
On Monday, Yemen’s Houthi militia movement reiterated that they were responsible for Saturday’s drone attacks, and accused those trying to blame the attacks on outside actors of acting like “cowards.”

US intelligence agencies have handed over a secret report to their Saudi counterparts which has implicated Iran directly for the weekend’s attacks on two major Saudi Aramco oil facilities, the Wall Street Journal has reported, citing unnamed sources said to be familiar with the situation.

According to the report, which has yet to be shared publicly, the strikes were staged from Iran, and involved some 20 drones and at least a dozen missiles.

A Saudi official speaking to WSJ said the report was not conclusive, adding that the US side hadn’t provided sufficient evidence that Tehran was ‘definitely’ behind the attacks.

On Monday, a coalition spokesman announced that Saudi authorities were still looking to figure out “from where” the projectiles used in the strikes were fired, saying the drones used were not launched from Yemen, as claimed by the Houthis. According to the coalition, a preliminary investigation had given them “all indications” to believe that the weapons in both attacks “came from Iran.”

Houthis: We Did It, Those Who Say Otherwise ‘Cowards’

Iran has repeatedly denied any involvement in the oil facility attacks, accusing the US of switching from a policy of “maximum pressure” to one of “maximum deceit,” while adding that the Yemeni people have every right to independently defend themselves against the Saudi-led military coalition.

Yemen’s Houthi militia, which claimed responsibility for the attacks almost immediately after they took place, accused parties attempting to blame other countries for the strikes an act of “cowardice,” adding that they were “surprised to see” Riyadh “exonerating Yemen” of these attacks despite previously declaring war on the country “on the grounds that our missile inventory posed a threat to its security.”

Earlier, anonymous US officials told Reuters that Washington would be looking to increase intelligence sharing with Saudi Arabia following the attacks on the Saudi Aramco facilities, but did not specify what form this intelligence cooperation would take. The US had previously selectively shared intelligence data with Riyadh on alleged threats posed by Yemen’s Houthi militias, against whom the Saudi-led coalition has been waging a war since March of 2015.

Late Monday, Saudi Arabia’s Foreign Ministry announced that it would “invite UN and international experts to view the situation on the ground and to participate in the investigations” into the attacks.

Also on Monday, UN Special Envoy for Yemen Martin Griffiths told the UN Security Council that it was “not entirely clear” who was behind the oil facility attack, but noted that “the fact that Ansar Allah [the Houthi movement] has claimed responsibility is bad enough.”

On Monday, amid US claims that Iran was responsible for the attacks, Russia and China issued statements urging all parties involved to refrain from rushing to conclusions about who was responsible. Moscow noted that it considered discussions about “military options” in response to the strikes as absolutely “unacceptable,” while China, a major customer of Saudi oil, urged all sides to refrain from “any actions that would cause escalation.”

000000
Popular comments
The attacks were staged and carried out by the Mossad/CIA from one of the many Iraqi-based US bases.

Igorito
17 September 2019, 14:44 GMT6
000000
Thats a massive change to the story 20 Drones and dozens of missiles sounds like a French US UK attack. How would dozens of missiles get through seems very far fetched perhaps its another 9/11 with Israeli saboteurs using plastic explosives.