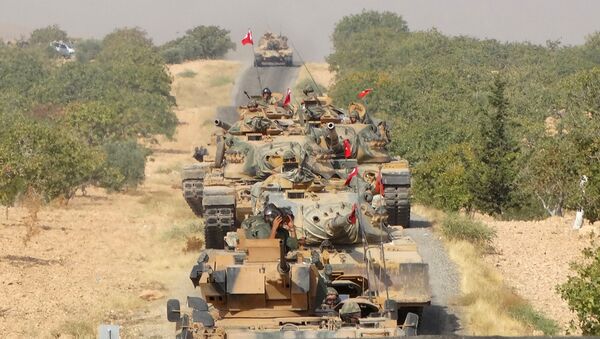 ANKARA (Sputnik) - Ankara is ready to start an operation against Kurdish militia in a safe zone in northeastern Syria within two weeks, if no specific measures are taken there jointly with the United States, Turkish President Recep Tayyip Erdogan said.

"If no specific measures are taken there [in the safe zone] within two weeks, we can start our own operation," Erdogan said after the Russia-Turkey-Iran summit on Syria in the Turkish capital.

According to Erdogan, Kurdish militia from the People's Protection Units (YPG) are keeping local population at bay.

The Turkish leader noted that as long as the YPG and the Kurdistan Workers’ Party (PKK) operate in northern Syria, the "Turkish people will no be able to live in safety."

The United States reached an agreement with Turkey in August to create the safe zone, following months of tensions between the two NATO allies over the presence of Kurdish militants in northern Syria.

The Syrian Democratic Forces, made up of mostly Kurdish YPG fighters, have been key allies of the United States in northern Syria, where US soldiers are still stationed. But Turkey views the Kurdish forces as a threat to national security and had repeatedly threatened to launch an incursion into northern Syria to force them out of the territory.

Under the agreement reached by Ankara and Washington, Kurdish YPG forces will remove their forces and heavy weapons from the safe zone.

Earlier in September, Erdogan said that US efforts on establishing the safe zone in northeastern Syria fell short of expectations of Ankara. Turkish Foreign Minister Mevlut Cavusoglu accused the US of delaying talks on the formation of the agreed safe zone, saying Washington was "dragging out" the process.