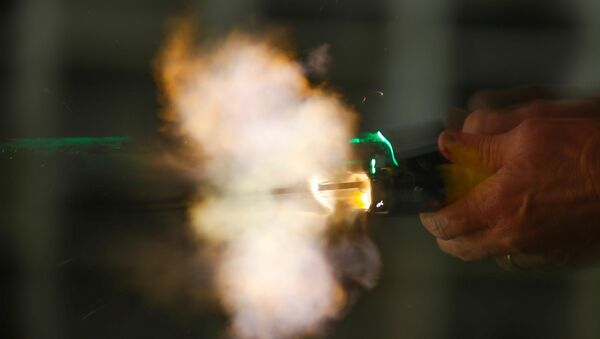 © REUTERS / Mike Blake
Subscribe
In an effort to minimize Taser-related deaths and maintain practical de-escalation procedures, US police departments across the country are beginning to test a device that looks more like something off Batman’s utility belt than a modern police tool.

Wrap Technologies’ BolaWrap, a handheld remote restraint that deploys an 8-foot Kevlar tether rope at 640 feet (200 meters) per second to apprehend suspects, has caught the attention of several US police departments and is being lauded as the future of de-escalation devices due to its non-lethal, simplistic usability.

Forces such as Minnesota’s Chaska Police Department, which began testing the device late last year, believe the BolaWrap is the perfect alternative to the traditional Taser stun gun, which deploys two barbed darts that latch on to an individual and delivers a paralyzing, and sometimes fatal, jolt of electricity.

"The moment I saw this device, I knew that we needed to have it," Chaska Police Chief Scott Knight told the Star Tribune last year. "This is one of the biggest advancements I've seen in my 43-year career. I wish I'd had this tool when I was an officer."

According to the department’s test of the BolaWrap, the restraint tool had a 90% success rate versus the Taser, which only deployed correctly around 50% of the time. When the Kevlar tether rope is deployed from the handheld device, the rope wraps around the individual, and the hooks, which appear similar to fishing hooks, attach to the suspect’s clothes.

Approximately 1,081 US deaths have resulted from police use of the Taser, which became widespread in the early 2000s, according to a February report from Reuters. A total of 84 Taser-related deaths by the hands of police officers were reported last year alone.

Not keen to fall behind on the changing times and evolution of technology, Thomas Smith, co-founder of Taser International - now known as Axon Enterprise Inc. - actually joined Wrap Technologies back in March 2019.

The move and backing by Smith may hint at a loss of faith in the Taser, which is particularly dangerous to those with certain medical conditions and individuals on medication or under the influence of other drugs.

"Whether it is a Taser, pepper spray, baton ... there's been this gap created by the courts requiring that a higher level of force be used at the appropriate time," Smith told Reuters in a recent interview on the BolaWrap.

“This tool fits perfectly into that gap giving the officers another option to use before having to use that high level of force to end that conversation very early, very safely,” he added.

The company has received some questions from users on YouTube who wonder if the device will be practical for use on fleeing suspects, due to the fact that many demonstrations only show a static example. Additionally, the strength of the hooks has been brought into question, and some wonder if they will be able to latch onto skin if the individual being pursued is wearing little or no clothing.

000000
Popular comments
I never tried it but to touch electrical live wires sure I do so no life trethening device are sure welcome! p.s. if you have child and may need self-defence, it could be a "nice" idea...
francescoslossel
18 September 2019, 01:12 GMT1
000000
Newsfeed
0
New firstOld first
loader
LIVE
Заголовок открываемого материала
Access to the chat has been blocked for violating the rules . You will be able to participate again through:∞. If you do not agree with the blocking, please use the feedback form
The discussion is closed. You can participate in the discussion within 24 hours after the publication of the article.
To participate in the discussion
log in or register
loader
Chats
Заголовок открываемого материала
Worldwide
InternationalEnglishEnglishMundoEspañolSpanish
Europe
DeutschlandDeutschGermanFranceFrançaisFrenchΕλλάδαΕλληνικάGreekItaliaItalianoItalianČeská republikaČeštinaCzechPolskaPolskiPolishСрбиjаСрпскиSerbianLatvijaLatviešuLatvianLietuvaLietuviųLithuanianMoldovaMoldoveneascăMoldavianБеларусьБеларускiBelarusian
Transcaucasia
ԱրմենիաՀայերենArmenianАҧсныАҧсышәалаAbkhazХуссар ИрыстонИронауОssetianსაქართველოქართულიGeorgianAzərbaycanАzərbaycancaAzerbaijani
Middle East
Sputnik عربيArabicArabicTürkiyeTürkçeTurkishSputnik ایرانPersianPersianSputnik افغانستانDariDari
Central Asia
ҚазақстанҚазақ тіліKazakhКыргызстанКыргызчаKyrgyzOʻzbekistonЎзбекчаUzbekТоҷикистонТоҷикӣTajik
East & Southeast Asia
Việt NamTiếng ViệtVietnamese日本日本語Japanese中国中文Chinese
South America
BrasilPortuguêsPortuguese
NewsfeedBreaking
11:36 GMTNew Zealand Deploys Naval Ship as Malaita Province Leader Seeks Independence from Solomon Islands
11:36 GMTUK House of Commons Discusses the 'Nationality and Borders Bill'
11:32 GMTWSJ Report on China’s Military Base on Africa’s Atlantic Coast ‘Not True' - Chinese Military Expert
11:31 GMTMinneapolis Man Arrested After Trying to 'Intimidate' Judge in Kim Potter Trial
11:14 GMTTrump's Oxygen Levels Fell 'Dangerously Low' During His Bout With COVID-19, Meadows Claims in Book
11:13 GMTChina’s Type 055 Destroyer Holds Anti-Submarine Drills Amid US Threats
11:09 GMTSouth Korea Backs Beijing Winter Olympic Games Despite US Boycott
11:04 GMTTrump Berates 'Corrupt News' Over Allegations He Was COVID-Positive Ahead of 2020 Debate With Biden
10:55 GMTLive Updates: Vladimir Putin and Joe Biden Hold Talks Amid Growing Tensions
10:52 GMTKremlin: US Decision on Beijing Olympics Can Hardly Be Called Boycott
10:45 GMTScientists Apply 'Immortality Mushroom' to Synthesise Nanogold
10:14 GMT'Blink Twice': Kamala Harris Aide 'Absolutely Loves' His Job, But Netizens Don't Buy It
10:09 GMTNovak Djokovic Signs Up for ATP Cup Amid Row Over Tennis Star's Vaccination Status
10:00 GMT'I Would Like Messi to Be Sincere': Robert Lewandowski Blasts PSG Star's Ballon d'Or Remarks
09:46 GMTPentagon Chief Concerned Over Americans' Declining Trust in US Military Under Biden
09:23 GMTCar Bomb Explosion in Southern Iraq Reportedly Kills 7 People - Video, Photo
09:14 GMTPalestinian Activist Adopts Recycling & Mass Education as PA Struggles to Cope With Piles of Waste
09:08 GMT'It's a Signal to Washington', Say Experts as India Expands Military Ties With Russia
08:58 GMTRussia Approves Flight of Two Japanese Tourists to ISS, Marking Return to Space Tourism
08:48 GMTAstroworld Tragedy: Travis Scott Asks Judge to Dismiss at Least One of 300 Lawsuits Against Him