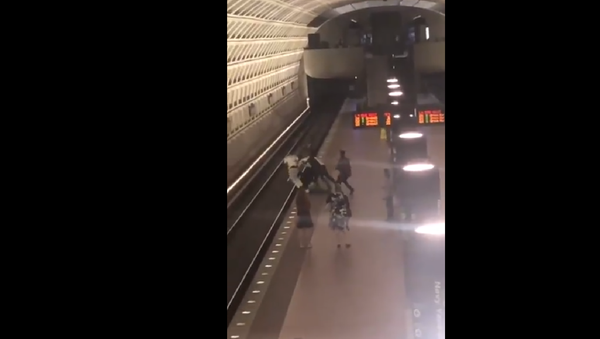 © Screenshot/Evan Lambert
Subscribe
International
India
Africa
A total of four teenagers were recently arrested by officers with Washington, DC’s Metro Transit Police Department in connection with an attack on a commuter who was viciously beaten and pushed onto train tracks.

The violent altercation began on September 13 when the unidentified commuter, who was traveling on the Metro system’s Green Line, was randomly slapped by a teenager as the train headed toward major transfer station Gallery Place.

However, the matter escalated even further after the rider got off at the line’s Navy Yard stop in an effort to pinpoint who it was that had struck him. Moments after stepping off the train, several teenagers encircled the commuter and began attacking him.

​Cellphone video captured by a nearby commuter shows the gaggle of teens chasing after the individual, punching and shoving him on the platform before ultimately sending him onto the empty train tracks.

At one point in the footage, two teenagers can be seen jumping down onto the tracks and appearing to approach their target to continue the brawl; however, the attackers are eventually seen hopping back onto the train platform before running away from the scene.

The video cuts off with the beaten commuter sitting on the tracks.

Speaking to local news station Fox 5, the commuter explained that the attack, which resulted in a broken knee cap, has left him out of work until he is able to recover from his injuries.

“People catch Metro every day from all walks of life, and if you can’t guarantee people’s safety - what good is your system?” he told the station, adding that he has no intention to ever ride the Metro system again.

The four arrested minors are now facing aggravated assault charges in connection to the Friday incident. It’s unclear if the arrests were made at the scene or if further individuals will be sought.

This incident, however, is just one of several Metro attacks to have made local news headlines. Earlier this year, law enforcement officials made arrests in cases that included a fatal stabbing, a sexual assault and an unprovoked attack on Metro riders, among other occurences.