Russia Concerned Over Attacks on Saudi Aramco, Warns Against Rushing to Conclusions on Culprit 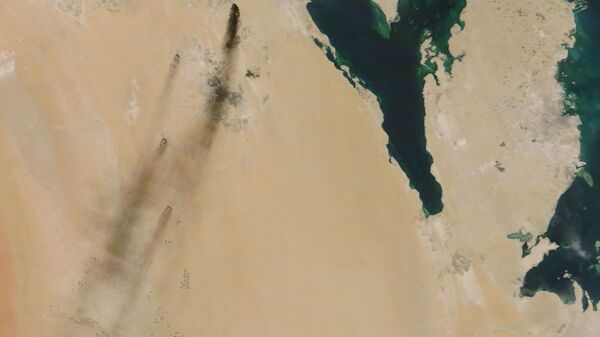 Ilya Tsukanov
All materialsWrite to the author
Yemen's Houthi militia movement claimed responsibility for the Saturday attacks on two major Saudi oil facilities, with the drone strikes thought to have crippled up to half of the country's entire output. The United States rushed to blame Iran for the attacks, with Tehran dismissing the claims as "incomprehensible and meaningless."

Russia has "serious concerns" about the weekend attack on Saudi Aramco oil processing facilities, and "resolutely condemns" the attacks on non-military targets, and any actions which could lead to imbalances in energy markets and to negative consequences for the world economy in general, the Russian Foreign Ministry announced on Monday.

At the same time, Moscow "strongly recommends against" rushing to conclusions about who is responsible for the attacks, and considers US discussions about 'military options' for responding to the attacks as totally "unacceptable," the Russian Foreign Ministry noted.

The Foreign Ministry also noted that the attacks were a "direct consequence of the continuing crisis in Yemen," namely the civil war and the Saudi-led military operation in that country which began in 2015.

Moscow also warned against "counterproductive" efforts to use the situation surrounding the attacks on the Saudi oil facilities to inflame tensions against Iran, in accordance with the well-known US attempts to do so in recent years.

Monday's comments follow an earlier statement by the Kremlin expressing hope that Riyadh would swiftly be able to cope with the consequences of the attacks on its oil facilities. On Sunday, presidential spokesman Dmitry Peskov similarly urged authorities from rushing to conclusions about the perpetrators of the attacks.

China, a major customer of Saudi oil, also cautioned Riyadh and its allies against rushing to conclusions in the wake of the attacks. On Monday, that country's Foreign Ministry said US-led efforts to blame Iran were "irresponsible," and added that China hopes "that the sides will refrain from any actions that may provoke an escalation."

"We noticed the relevant statements, we believe that it is irresponsible to blame anyone before a proper investigation and its results," Chinese Foreign Ministry spokeswoman Hua Chunying said.

On Sunday, US President Donald Trump said he had "reason to believe that we know the culprit" of the oil facility attacks, and warned that the US was "locked and loaded" pending verification and a Saudi comments on who they believe is responsible. Trump's comments followed remarks by Secretary of State Mike Pompeo just hours after the attack blaming Iran.

Tehran has blasted both Trump and Pompeo's remarks, with Iranian Foreign Ministry spokesman Abbas Mousavi saying US allegations were "unacceptable and entirely baseless." Earlier, Iranian Foreign Minister Mohammad Javad Zarif accused the US of switching to a strategy of "maximum deceit" by blaming Iran for the attacks after "failing" with its earlier declared policy of "maximum pressure."

Houthis: 'We Did It'

Yemen's Houthi militia movement have repeatedly claimed responsibility for the drone attacks, saying they used 10 small kamikaze drones to hit the two major Saudi energy facilities, and warning that they would stage more attacks as long as the Saudi-led war against Yemen continues.

On Monday, Houthi spokesman Gen. Yahya Sare'a warned that the militants would reserve the right to continue hitting Saudi targets "anywhere and anytime" it chooses until Riyadh ends its "aggression and blockade on Yemen."

At the same time, Mohammed al-Bukhaiti, a member of the Houthis' Supreme Political Council, told Iranian media that attempts to blame the Houthis' strikes on other countries was an act of "cowardice."

"Saudi Arabia declared war against Yemen on the grounds that our missile inventory posed a threat to its security. Today, we are surprised to see that when we hit Saudi oil wells, they exonerate Yemen from conducting these strikes and accuse others of doing them. This is viewed as an own criminal decree of conviction. It also shows their cowardice," al-Bukhaiti said, his remarks quoted by PressTV.

On Sunday, the Wall Street Journal reported, citing Saudi officials, that Riyadh intends to restore a third of the production lost due to the drone attacks by Monday, but added that the situation at the refineries was 'worse than initial assessments' had suggested.