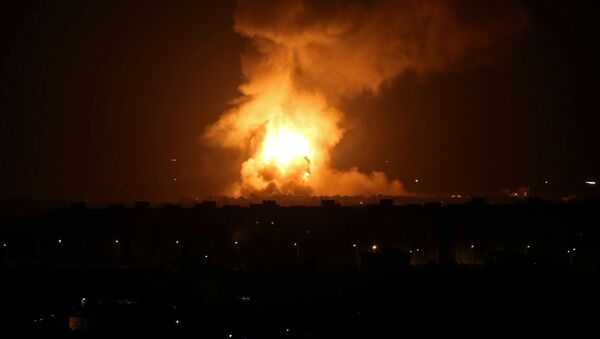 The Israeli military carried out airstrikes against purported terror targets in Gaza in response to a rocket attack that appeared to target a Netanyahu rally. The prime minister is said to have considered a larger military operation but backed down following legal advice that such a move would require the security cabinet’s approval.

A large-scale Israeli retaliatory strike on Gaza has been averted after Prime Minister Benjamin Netanyahu was told he would need cabinet approval to make the move, Haaretz reports.

Militants in Gaza fired at least two rockets on Tuesday evening toward the coastal city of Ashdod, situated between the Palestinian enclave and Tel Aviv, and nearby Ashkelon. The projectiles, which were shot down by anti-missile systems, appeared to target a Netanyahu campaign rally; the prime minister, who was speaking to voters at the time, was forced to leave the stage for a bomb shelter.

No group claimed responsibility, but Israel attributed the attacks to Hamas and struck 15 of its targets in Gaza a few hours later – although it appears that the response could have been even stronger.

Israel’s retaliatory strike – slightly more intensive that the most recent ones – was preceded by a discussion with top military commanders at the Defence Ministry, where Netanyahu is understood to have raised the possibility of a “far-reaching” military operation.

However, according to Haaretz, Attorney General Avichai Mendelblit persuaded Netanyahu to back off. He is said to have cited a 2018 law that prohibits the prime minister and defence minister from declaring war or authorising significant military operations without cabinet approval. The amendment rescinded an earlier clause that allowed such actions in “extreme circumstances”.

Mendelblit reportedly advised that Netanyahu would first have to receive approval from the security cabinet, a smaller body within the government – which, in turn, must consult with the chief of staff before making the decision. It is claimed that senior defence officials also objected to a military operation in Gaza, forcing Netanyahu to back down.

In a separate report, Haaretz claimed that Netanyahu's National Security Adviser, Meir Ben-Shabbat, had told the head of the Central Elections Committee to prepare for the possibility of delaying the general election due to war.

The Israeli government refused to comment on security matters.

Israel and the Gaza-based militants (primarily Hamas and Islamic Jihad) last fought a war in 2014, and have since been trading sporadic fire across the border, often accompanied by rocket strikes.

During his campaign ahead of Tuesday’s general election, Netanyahu said that rocket fire from Gaza is making another war inevitable.

“There probably won’t be a choice but to launch an operation, a war with the terror forces in Gaza,” he told a local broadcaster last week. In a separate speech, he said a war against Gazan armed groups could break out at any moment, even before the election.

The latest polls show Netanyahu’s Likud party running neck to neck with the opposition Blue and White alliance, led by his former military chief Benny Gantz. It means that whoever wins the election will have to make deals with smaller parties to secure a majority in the Knesset and form a government.

The September snap election was called after Likud failed to achieve the required 61-seat majority in the April vote and subsequently failed to put together a governing coalition.