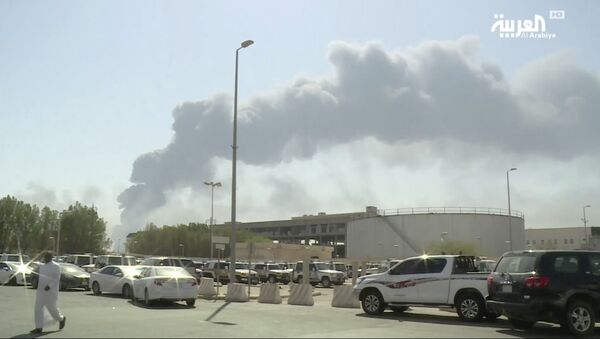 © AP Photo / Anonymous
Subscribe
While Yemeni Houthi rebels have claimed responsibility for the recent drone attacks on Saudi oil facilities, US Secretary of State Mike Pompeo was quick to lay the blame on Iran. Donald Trump said the US has "reason to believe that we know the culprit"; Iran denies any role in the incident.

Iran's foreign ministry has poured scorn on accusations about Tehran's alleged role in the weekend attacks on a critical Saudi oil plant and oilfield.

In the early hours of Saturday, two Saudi Aramco plants were targeted in what local authorities called a drone attack, which set the oil facilities ablaze and prompted the kingdom to halt about half of its crude output.

US Officials React to the Attack

Yemen's Houthi militants said they were responsible for the drone strike. The movement said on Monday, as quoted by Reuters, that Saudi Aramco's oil facilities were still in the crosshairs and could be attacked at "any moment".

However, Mike Pompeo said there was "no evidence the attacks came from Yemen" and pointed the finger at Iran. Donald Trump was less forthcoming, saying that the United States was "locked and loaded depending on verification" of the culprit and is waiting for verification from Saudi Arabia, which has not mentioned any names so far.

Trump did not name Iran or specify whether a military option was on the table; however, the Washington Post reported on Monday, citing a source in the US administration, that the United States was considering a "serious military response", though some military officials were urging restraint.

In a separate as-yet-unconfirmed report, a unnamed senior US official told ABC News that Iran was behind the attack, firing around a dozen cruise missiles and over 20 drones from its territory to target the Saudi oil facilities. "It was Iran," the official was quoted as saying. "The Houthis are claiming credit for something they did not do."

Abbas Mousavi earlier said that “such [American] comments and measures are more akin to the plots hatched by secret and intelligence services for damaging the image of a state to prepare the ground for a series of [hostile] measures in [the] future”.

Houthi fighters regularly conduct drone attacks on facilities in Saudi Arabia, which has been fighting in Yemen, with the US's blessing, as part of an Arab coalition to restore the internationally-recognised government, which fled the nation's capital Sana'a in early 2015. In May of this year, the Houthis conducted a drone attack on a major Saudi pipeline. At the time, Riyadh claimed Iran was behind the strike, but Iran refuted the accusations.

000000
Popular comments
“Strike against war, for without you no battles can be fought! Strike against manufacturing shrapnel and gas bombs and all other tools of murder! Strike against preparedness that means death and misery to millions of human beings! Be not dumb, obedient slaves in an army of destruction! Be heroes in an army of construction!: Helen Keller. - Source: Told to an audience at Carnegie Hall one year before the United States entered World War I. From 'Declarations of Independence' by Howard Zinn page 75.