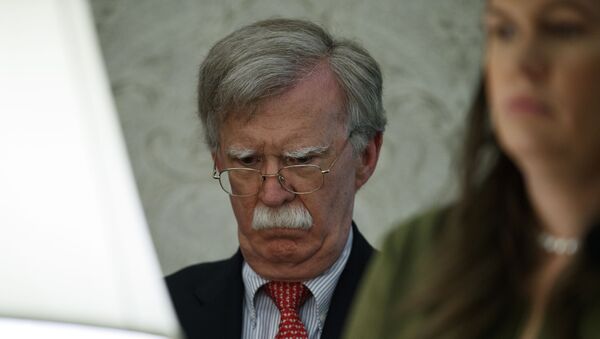 US President Donald Trump reportedly proposed lifting tough sanctions against Iran as a means of encouraging Tehran to renegotiate the 2015 JCPOA.

Tump's idea, however, did not sit well with former National Security Adviser John Bolton during a Monday discussion concerning Iran in the Oval Office between the two. Bolton told Trump that he strongly disagreed with the idea of easing pressure on Tehran, NBC News reported, citing a source familiar with the matter.

On Tuesday, Trump fired Bolton, stressing, however, that the two had a number of "strong" disagreements, including on Venezuela and North Korea.

Bolton has long had a hard-line stance on Iran, and opposed negotiating with Tehran. It was during his tenure that the United States withdrew from the Obama-era Joint Cooperative Plan of Action (JCPOA) Iran nuclear deal in 2018, re-applied heavy sanctions on Tehran and launched a massive military buildup in the Persian Gulf.

In late August, the White House said that Trump wanted to talk to Iran's leaders about a new nuclear deal without preconditions such as sanction relief.

The two countries have been at odds for the past several months. Apart from the nuclear deal, Tehran and Washington clashed after several tankers in the Persian Gulf were attacked and the US accused Iran of the actions. Tehran has denied any involvement.

In July, Iranian authorities seized a UK-flagged tanker in the Strait of Hormuz, prompting sharp criticism from the White House. Trump unsuccessfully called on US allies to establish a maritime coalition to protect vessels passing through Hormuz.

Just prior to Bolton's departure, multiple US officials voiced the possibility of a meeting between Trump and Iranian President Hassan Rouhani. In particular, US State Secretary Mike Pompeo said that the two leaders could hold talks on the sidelines of an upcoming UN General Assembly.

The head of the media office of the Iranian mission to the UN, Alireza Miryousefi, said that a meeting between Trump and Rouhani had not been scheduled.

The 74th session of the UN General Assembly General Debate will kick off on 24 September. During the high-level week, world leaders will have an opportunity to discuss global issues in person.