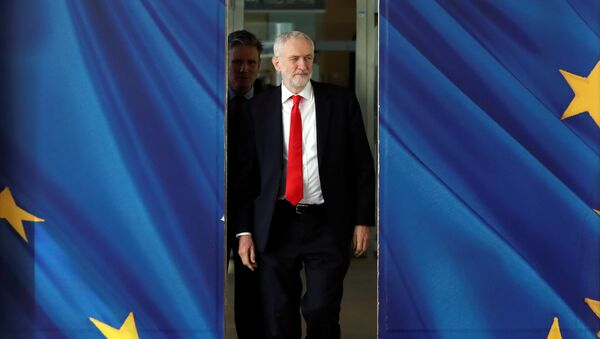 Svetlana Ekimenko
All materialsWrite to the author
As the UK's Brexit saga continues, the embattled Prime Minister has been publicly supported by US President Donald Trump, who called him “exactly what the UK has been looking for”, while opposition voices, led by Labour leader Jeremy Corbyn, lambasted a no-deal Brexit as “really a Trump Deal Brexit”.

A United States Army War College professor's report is said to urge US President Donald Trump to refrain from sharing sensitive information and possibly push for the UK’s NATO membership to be “downgraded” in the event that Jeremy Corbyn, the leader of the country’s Labour Party, is elected Prime Minister, reports The Telegraph.

The document, written by Dr. Azeem Ibrahim, a professor at the United States Army War College, and due to be published this week, suggests Jeremy Corbyn cannot be trusted.

The analysis highlights the support purportedly displayed by some of Jeremy Corbyn’s advisors for Russia’s President Vladimir Putin and cites the Labour leader’s response to the Salisbury incident, as part of which he demanded proof of the Kremlin’s alleged complicity in the alleged poisoning attack.

When Corbyn was asked about the Novichok poisoning in Salisbury in March last year, he responded by saying “the evidence points towards Russia”, giving rise to speculation that the Labour leader was reluctant to join the chorus of voices blaming Russia directly for the incident despite lack of credible proof.

Russian former spy Sergei Skripal, 66, and his daughter Yulia Skripal, 33, were found unconscious on a bench in Salisbury, UK after being poisoned by the nerve agent on 4 March 2018.

US President’s endorsement of Boris Johnson

More recently, amidst the Brexit turmoil and UK Prime Minister Boris Johnson’s desperate attempts to deliver on his pledges to take the country out of the EU by the deadline of 31 October, Corbyn blasted Trump for cheering on Johnson's decision to prorogue parliament.

After the main British opposition party’s leader spoke of trying to block Johnson’s move, the US President had tweeted it would be hard for the Labour leader “to seek a no-confidence vote against New Prime Minister Boris Johnson, especially in light of the fact that Boris is exactly what the UK has been looking for”.

Would be very hard for Jeremy Corbyn, the leader of Britain’s Labour Party, to seek a no-confidence vote against New Prime Minister Boris Johnson, especially in light of the fact that Boris is exactly what the U.K. has been looking for, & will prove to be “a great one!” Love U.K.

​The Labour leader said the American president was only supportive of Boris Johnson so the UK will “hand Britain’s public services and protections over to US corporations” in a trade deal.

Jeremy Corbyn tweeted: “I think what the US president is saying, is that Boris Johnson is exactly what he has been looking for, a compliant prime minister who will hand Britain's public services and protections over to US corporations in a free trade deal.”

I think what the US president is saying, is that Boris Johnson is exactly what he has been looking for, a compliant Prime Minister who will hand Britain's public services and protections over to US corporations in a free trade deal. https://t.co/kcg2jkYi0o

​The row erupted after Boris Johnson's plan to suspend Parliament for five weeks, starting on 9 September, was given the Queen's blessing.

While the UK is still in the throes of working out a Brexit deal and exit schedule from the EU, the US has been eager to reach a new trade pact.

“Our message is clear: The minute the UK is out, America is in,” Vice President Mike Pence said in a visit with British Prime Minister Boris Johnson at 10 Downing Street on 5 September.

British officials are already vowing to resist an agreement that is lopsided in favour of Washington.

“I know that you guys are pretty tough negotiators. So, we’re going to work very hard to make sure that that free trade deal is one that works for all sides,” Johnson told Pence.

Labour leader Jeremy Corbyn, however, when addressing a Trades Union Congress in Brighton on 10 September, repeated his claim that a no-deal Brexit would play into the hands of US President Donald Trump.

“Be in no doubt, a no-deal Brexit is really a Trump Deal Brexit, leading to a one-sided US trade deal negotiated from a position of weakness. It will put us at the mercy of Trump and the big US corporations itching to get their teeth further into our NHS, sound the death knell for our steel industry, and permanently drive down rights and protections for workers. I am not prepared to stand by and let that happen.”

Before it can pursue a brand-new trade deal with Washington, London has to negotiate its divorce with the EU or crash out of the bloc without a deal.

The largest obstacle is the fate of the border between the independent Republic of Ireland and Northern Ireland, which is part of the United Kingdom.

Currently, people and goods can freely cross the Irish border, as both the UK and Ireland belong to the EU.

If the border stays open after Brexit, a US-UK trade deal won’t work, since an open border would allow goods from the remaining 27 EU countries to enter Britain via the Republic of Ireland, with the possibility of them being exported to the US under the terms of what is supposed to be an exclusive deal between the UK and US.

A hard border between the two Irelands would risk rekindling old animosities.

Furthermore, House Speaker Nancy Pelosi repeatedly stated there is “no chance” the US Congress will approve a trade pact with Britain if Brexit closes the Irish border.

Still, once Brexit issues have been resolved US-UK trade talks might proceed more smoothly, bearing in mind the fact that Donald Trump seems to evidence a friendlier relationship with Boris Johnson than he does with many other leaders.