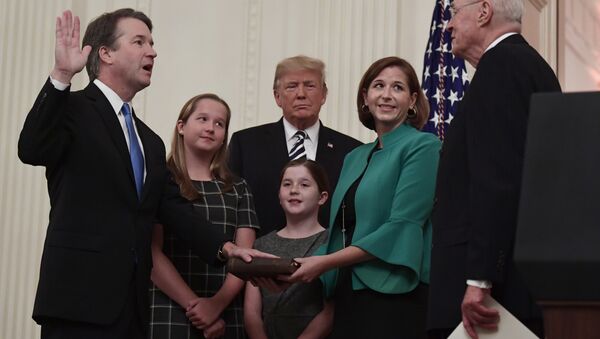 © AP Photo / Susan Walsh
Subscribe
International
India
Africa
New allegations around Trump-appointed Supreme Court Justice Brett Kavanaugh emerged over the weekend, with a former high school classmate claiming that he saw him expose and rub his genitals on a girl without consent.

US President Donald Trump took to twitter during the early hours of Sunday to accuse "Radical Left Democrats" and the "LameStream Media" of trying to impeach and scare Justice Brett Kavanaugh into turning liberal.

​As well as support for Kavanaugh and the President with some accusing the "radical left democrats" of having no shame.

The President made another tweet later on Sunday suggesting the Kavanaugh start "suing people for libel" and that the "false accusations" are made with the aim of influencing his opinions.

The tweet follows fresh sexual harassment accusations against Justice Kavanaugh from a male former classmate who claims he witnessed Kavanaugh push his genitals up against a woman without her consent, as reported by the New York Times on Saturday.

According to The NYT, the allegations were reported to the FBI but were not made public or investigated during Kavanaugh's Supreme Court confirmation process in 2018.

Allegations against Kavanaugh initially emerged after he was nominated for the Supreme Court in 2018 when Professor Christine Blasey Ford of Palo Alto University accused Kavanaugh of sexually assaulting her back in high school.

Kavanaugh subsequently issued a statement via the White House" categorically and unequivocally" denying the allegation and that he had not committed the alleged crime "back in high school or at any time."

Despite the White House ruling on 4 October 2018 that he was not guilty of sexual assault, the controversy surrounding Justice Kavanaugh refuses to go away.