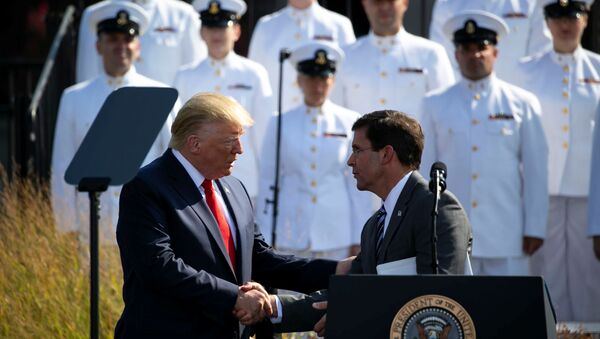 A Saturday drone attack caused massive fires at two of Saudi Aramco's largest oil facilities - in Abqaiq and Khurais - halting the daily production of an estimated 5.7 million barrels of crude.

US President Donald claimed that the US has "reason to believe that we know the culprit," noting that Washington is "locked and loaded depending on verification" and is waiting to "hear from the Kingdom as to who they believe was the cause of this attack."

Shortly after that Trump added another tweet that reads "PLENTY OF OIL!".

Earlier Trump said that he had authorized "the release of oil from the Strategic Petroleum Reserve" (SPR) in wake of the attacks, warning that the incident with Saudi Aramco's plants could impact prices and investment on the global oil market.

....sufficient to keep the markets well-supplied. I have also informed all appropriate agencies to expedite approvals of the oil pipelines currently in the permitting process in Texas and various other States.

On Sunday, White House senior counselor Kellyanne Conway said there are “many options on the table” regarding ways of responding to attacks against Saudi Aramco facilities that have been blamed on Iran by the Trump administration, according to Fox News.

In the early hours of Saturday, two Saudi Aramco plants, in Abqaiq and Khurais, were attacked, leading to fires and production suspension of 5.7 million barrels of crude oil per day, which is about half of Saudi Arabia’s total daily production.

Saudi Arabia, which accounts for about 10% of the total global oil supply, said it was working on restoring full output. Some media reports have claimed that repair work could take weeks. Meanwhile, the kingdom, which is the world’s largest oil exporter, is relying on its storage to maintain regular exports.

Following the crippling attacks, Saudi Arabia announced that it would restore by Monday a third of the lost oil production following the drone attacks on its refining facilities. According to the Wall Street Journal, citing a source, the situation is purportedly worse than initial assessments made directly following the attack.

Yemen's Houthi armed political opposition faction claimed responsibility for the attacks, although US State Secretary Mike Pompeo accused Iran of being responsible. Tehran has refuted the US accusation.

In particular, Iranian Foreign Minister Mohammad Javad Zarif slammed Pompeo's claims as "false" and said that the United States cannot stop the war in Yemen by blaming Iran for everything.

Houthi fighters regularly conduct drone attacks on facilities in Saudi Arabia, as Riyadh has been providing weapons in the air and on the ground to Yemen’s internationally-recognized government in exile since spring 2015.