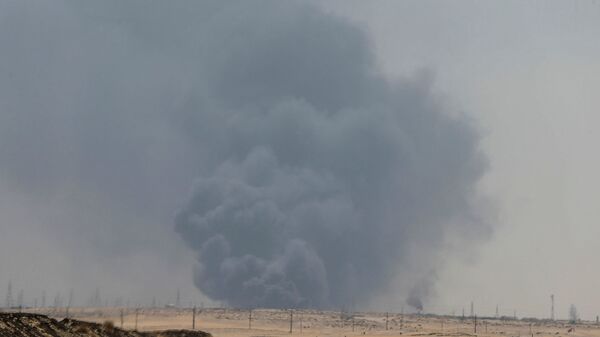 Ilya Tsukanov
All materialsWrite to the author
Houthi drone attacks on two major Saudi Aramco facilities, including the largest crude stabilisation plant in the world, have sparked concerns over the attacks’ impact on global oil prices, with the oil-rich country confirming that about half of its production, accounting for about 6 percent of the world’s total, had been affected by the strikes.

On Sunday, White House advisor Kellyanne Conway appeared on Fox News to reassure Americans that the US Department of Energy “stands ready to tap into the Strategic Petroleum Reserve if we must to stabilise the global energy supply.” Meanwhile, a source in India’s oil refining industry told Reuters that Saudi Aramco has promised ‘no immediate impact’ on crude deliveries, saying the company had reserves to draw from.

Other major importers of Saudi oil, including China, South Korea and Japan, have yet to comment directly on the attacks, but are likely equally concerned at the prospect of the loss of about half of Saudi Arabia’s 12.42 million barrel per day output.

Speaking to Reuters on Sunday, unnamed oil industry sources suggested that it may take “weeks, not days,” for Saudi production to be restored, leading to questions about what kind of long-term impact the reduced Saudi output will have on energy prices, and the global economy in general.

Dr. Nafis Alam, an adjunct professor of finance at the department of business management at the Sepuluh Nopember Institute of Technology in Surabaya, Indonesia, and research affiliate with the Cambridge Centre for Alternative Finance, said he expects oil prices to see a jump over the short term, but expects the supply shortfall not to have a long-term impact.

“Definitely, in the short run oil prices could immediately spike by $5-$10 [a barrel] when markets reopen on Monday morning, but in the long term I anticipate there will be a minimal rise,” Dr. Alam said. “In fact the same sentiments are echoed by the International Energy Agency as markets are supplied with ample commercial stocks,” he explained.

At the same time, the professor warned that the real “big issue in hand is the political fallout of the attack where the USA and the Kingdom of Saudi Arabia are putting the blame on Iran, which will further escalate the tension in the Middle East, which” in turn, could “further push the concern of future supplies.” 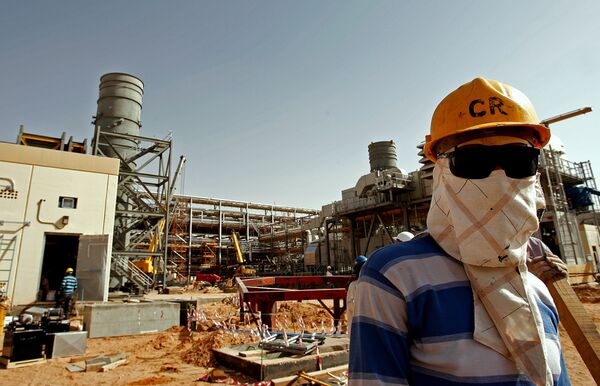 An Asian worker covers his face to protect it from the dust and the blazing sun at the site of Saudi Aramco's (the national oil company) Al-Khurais central oil processing facility under construction in the Saudi Arabian desert, 160 kms east of the capital Riyadh (File)
© AFP 2022 / MARWAN NAAMANI

Other observers, including Bob McNally, an energy expert and Washington-based energy consultant, warned Sunday that oil prices could jump by ‘at least’ $15-20 per barrel if the damage takes a week to repair, and into $100+ territory if Saudi Aramco’s repair works take a month or more. Similarly, Greg Newman, co-CEO of Onyx Commodities, a London-based trading company, told Reuters that $100+ oil prices are possible if Riyadh does not fix the supply dearth quickly.

Other analysts, including JP Morgan consultant Christian Malek and Gary Ross of Black Gold Investors, said Saturday’s attacks place focus on a new “irreversible risk premium” on Saudi oil which will have to be taken into account in the future, with Ross noting that such attacks “are difficult to stop and could occur periodically.”

Dr. Tilak Doshi, managing consult for Asia at Muse & Stancil, a global consultant specialising in energy, offered the most dire perspective on Saturday’s events, arguing that “in the oil universe, this attack is perhaps equivalent to the 9/11 attacks. [Saudi Arabia’s] Aqaiq [facility] is easily the world’s single most important oil production and processing infrastructure site.”

“For Asian governments, perhaps this overtakes the perennial concern about the safety of tanker traffic in the Strait of Hormuz with even more serious concerns about the impact of a direct breakout of hostilities between the Saudi alliance and Iran,” Doshi added.

On Saturday, Yemen’s Houthi militants claimed responsibility for two drone attacks which caused massive fires at two Saudi Aramco oil facilities overnight Saturday, reporting that they used 10 drones in the attacks, and threatening further attacks against the Kingdom so long as the Saudi-led war against Yemen continues.

The fires hit Abqaiq, a major oil refinery in Saudi Arabia’s Eastern Province, and a processing facility near the Khurais oil field, about 160 km east of Riyadh. Saudi energy minister Prince Abdulaziz bin Salman later confirmed that the attacks led to the interruption of the production of some 5.7 million barrels of crude oil, or about fifty percent of the company’s total output. In addition, the explosions halted the production of some 2 billion cubic feet of petrochemical compounds. Prince Abdulaziz noted that fortunately, no Saudi Aramco workers were killed or injured in the attacks.

Speaking to President Trump following the attacks, Saudi Crown Prince Mohammed Bin Salman assured Washington that Riyadh was “willing and able to confront and deal with this terrorist aggression.” US Secretary of State Mike Pompeo, meanwhile, immediately accused Iran of being behind the Houthi strikes. Iranian Foreign Minister Mohammad Javad Zarif blasted Pompeo’s claims on Sunday, accusing the US of switching from its “failed” policy of “maximum pressure” to one of “maximum deceit” by blaming Iran for the Houthis’ attacks. 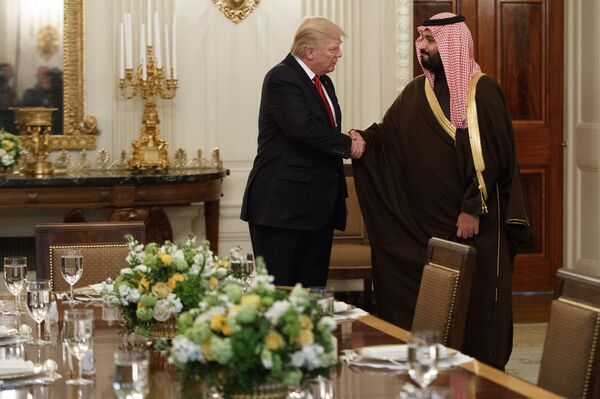 The Houthi militia have waged an extensive drone and missile-based campaign against infrastructure and military facilities across Saudi Arabia in recent years. The militant group claims its attacks are a response to the Saudi-led military campaign in their country, which began in 2015, and aims to restore the government of President Abdrabbuh Mansour Hadi, who fled Sanaa in 2014. US officials have repeatedly claimed that Iran was supplying Houthis with their makeshift drones and rockets. Iran has denied these claims, however, pointing to the coalition’s blockade against that country’s ports. The war has killed tens of thousands of Yemenis and caused a humanitarian crisis in the country, with hundreds of Saudi soldiers and civilians also believed to have been killed by the Houthi attacks across the border. 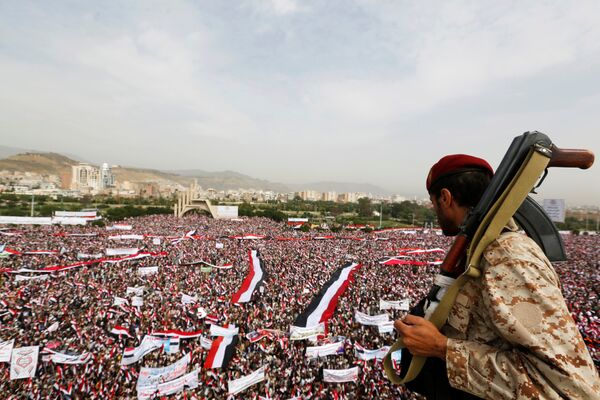 A soldier looks at people rallying to show support to a political council formed by the Houthi movement and the General People's Congress party to unilaterally rule Yemen by both groups, in the capital Sanaa August 20, 2016
© REUTERS / Khaled Abdullah
Newsfeed
0
Access to the chat has been blocked for violating the rules . You will be able to participate again through:∞. If you do not agree with the blocking, please use the feedback form
The discussion is closed. You can participate in the discussion within 24 hours after the publication of the article.
To participate in the discussion
log in or register
loader
Chats
Заголовок открываемого материала