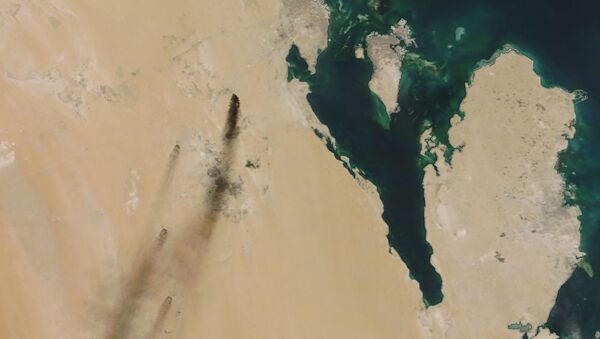 Subscribe
A series of drone strikes were launched against two of Saudi Arabia's largest oil fields on the night of 14 September. Despite Yemeni groups claiming responsibility, the US blamed Iran for the attack,. Relations between the Washington and Tehran have soured following last year's US withdrawal from the 2015 Iran nuclear deal.

Satellite images of the damage from strikes against two Saudi Arabian oilfields emerged on Saturday, showing pillars of black smoke rising from plants in Abqaiq, Bugayg, the largest oil processing facility in the world and Khurais, the second largest oil field in Saudi Arabia.

​Videos online show smoke rising from the facility in Abqaiq, which is owned by the Saudi state-owned company Aramco, and what may be gunfire can be heard in the background. The attack happened on Sunday morning at 4.00am (01:00 GMT).

Yemeni Houthi rebels took responsibility for the attacks through their Al-Masirah news agency, confirming a "large-scale" operation involving 10 drones - the largest assault on Saudi Arabia in over a decade.

An Iranian foreign ministry spokesman dismissed US allegations that Iran was to blame for the attack, calling the accusations "useless" and "pointless," according to the Associated Press on Saturday.

The Saudi energy minister also confirmed on Saturday that the attacks knocked out around 50% of the country's oil production but the ministry said it would be able to replace this with existing oil stocks.

On Sunday morning, the US Secretary of State Mike Pompeo hit out at Iran in a tweet accusing Tehran of being behind the strike, saying that “Iran has now launched an unprecedented attack on the world’s energy supply."

Tensions between Iran and the US have risen in recent months with the Islamic Republic saying that it would exceed uranium enrichment limits set under the 2015 Joint Comprehensive Plan of Action (JCPOA) or 'Iran nuclear deal.' The US has responded by warning Iran to be "careful".

Iran however claims that due to the withdrawal of the US from the agreement, it is no longer required not to enrich uranium.

Meanwhile, Saudi Arabia and Iran are fighting a proxy war Yemen where Tehran-backed Houthi rebels are locked in conflict with the Saudi-backed government of President Abdrabbuh Hadi.