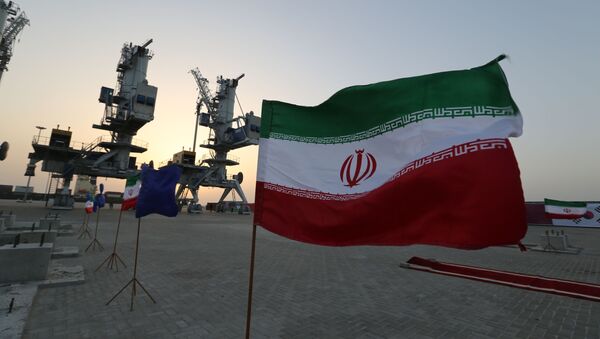 New Delhi (Sputnik): India stopped buying oil from Iran starting from May of this year, in order to comply with US sanctions on that country. Iran was the third-largest supplier of crude to India until New Delhi suspended its imports. Iraq, Saudi Arabia and Iran accounted for two-thirds of Indian crude imports.

An ideological affiliate of India’s governing Bharatiya Janata Party (BJP) has now come out and advised Prime Minister Narendra Modi to reconsider New Delhi’s decision; to ignore US demands not to purchase oil from Iran as it would represent a strategic setback for India.

“By its decision (not to purchase oil from Iran) India is on the way to losing the Chabahar port to China, which has continued to purchase Iranian crude oil, ignoring the US. Losing Chabahar would be a major strategic setback,” said Ashwini Mahajan, national co-convener of the Swadeshi Jagaran Manch (SJM), or Forum for National Self-Reliance, an affiliate of Rastriya Swayamsevak Sangh (RSS).

⁦CC ⁦@narendramodi⁩ By its decision (not to purchase oil from Iran) India is on the way to losing the Chabahar port to China, which has continued to purchase Iranian crude oil ignoring US. Losing Chabahar would be a major strategic setback https://t.co/wPrq8UwvDy

​India’s strategic relations with Iran go beyond the oil trade. New Delhi is developing the strategic Chabahar port, considered a golden gateway for its trade with Iran, Afghanistan and Central Asian countries. The port, situated on the Indian Ocean in Iran's Sistan and Baluchistan provinces, is easily accessible from India’s western coast. It is seen as an answer to Pakistan’s Gwadar Port, which is being developed with Chinese assistance.

Though the American sanctions won’t hit the development of Chabahar's port (Washington had clarified that it is an exception), Mahajan fears Beijing would step in as a strategic ally of Tehran in times of crisis to replace New Delhi.

In the case of its S-400 acquisition from Russia, India had sidestepped the US sanctions, considering it “in the national interest”.

Tehran has cultural and strategic relations with New Delhi. It has partnered with India to build a Transit and Transport Corridor to Afghanistan. Iran is also a partner in India’s ambitious plan to reach out to Eurasia.

New Delhi had signed a Memorandum of Understanding with Moscow earlier this year for fast-tracking the International North-South Transport Corridor. The proposed multi-mode Corridor is designed to connect India to Russia, Western Europe, the Baltic States, and Scandinavia through the Persian Gulf. It would reduce transportation time by half.

During the recent India-Russia Summit, both New Delhi and Moscow had vowed in a joint statement to continue their trade and economic cooperation with Iran, which they qualified as “mutually beneficial and legitimate”.