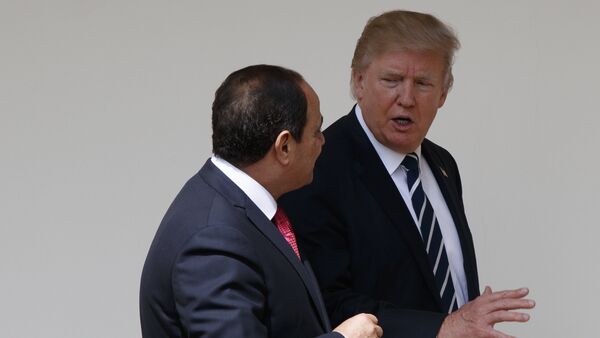 US President Donald Trump was reported to have been waiting for his "favorite dictator" - Egyptian President Abdel Fattah Sisi - on the sidelines of the last Group of Seven (G7) summit at a hotel in Biarritz, France, back in August.

"Where’s my favorite dictator?", Trump said in a loud voice - enough to be heard by a small gathering of US and Egyptian officials inside a room of the Hotel du Palais, The Wall Street Journal reported.

It is not known whether the Egyptian president heard Trump's comment. According to the US-based media outlet, citing sources, this loud exclamation by Trump stunned the group of officials into silence.

On the sidelines of the last G7 Summit in southwest France Trump and Sisi mainly discussed Libya, according to The White House.

Trump has previously said of Sisi: “We understood each other very well. He’s a very tough man, I will tell you that. But he’s also a good man, and he’s done a fantastic job in Egypt. Not easy”.