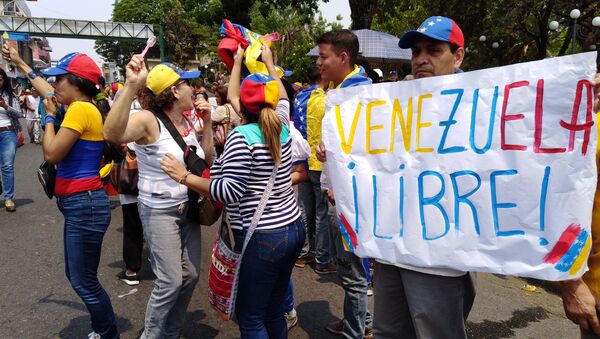 © Sputnik
Subscribe
Svetlana Ekimenko
All materialsWrite to the author
Earlier in the week, Venezuela’s Foreign Minister Jorge Arreaza said his country was prepared to defend itself if invaded, after Washington and a number of other US allies invoked a 1947 defence agreement, defining an ongoing large-scale Venezuelan military exercise near the Colombian border as a “bellicose” move.

Uruguayan Defence Minister Jose Bayardi has voiced concern over the threat of a military conflict in Venezuela as he noted that some countries have been advocating the idea of interference in the Venezuelan crisis.

"There is a possibility of eruption of a military conflict in Venezuela. There are permanent tensions around the conflict. At the same time, some Latin American countries continue to promote the military solution to the conflict ... that would be a disaster for the region and a sign of lacking responsibility of these governments," Bayardi told Sputnik on 13 September.

Jose Bayardi defined the situation in Venezuela as an "institutional crisis," as he claimed that the country's opposition was actively calling for a military interference in Venezuela.

The Uruguayan Defence Minister called on both the Venezuelan government and the opposition to search for the ways to solve the crisis, as he lashed out at the United States for destabilizing the situation in Venezuela via the unilateral sanctions against Caracas.

Venezuela vows to defend itself

Earlier this week, the US and a number of other American allies invoked a 1947 defence agreement, defining an ongoing large-scale Venezuelan military exercise near the Colombian border as a “bellicose” move.

According to the treaty, of which Venezuela is a party, every country must treat an attack on any member as an attack on itself.
Venezuela’s Foreign Minister Jorge Arreaza said on 13 September his country was prepared to defend itself if invaded, according to an AFP report.

This news followed moves by Venezuela's armed forces to mobilise 150,000 troops for military exercises on the Colombian border on Tuesday, after condemning Colombia for attempting to spark a military conflict. Colombia, on the other hand, accused Venezuela of sheltering Revolutionary Armed Forces of Colombia (FARC) dissidents.

The government of Venezuela and the opposition have held several rounds of talks mediated by Norway on Barbados to resolve their disagreements.

Though the government skipped the 8-9 August talks, President Nicolas Maduro said dialogue had been resumed with Norway to re-engage in the negotiations with the opposition, as Venezuela is committed to a peaceful resolution of the crisis.

Venezuela has long been suffering from a humanitarian and political crisis that intensified in January when, after disputing President Nicolas Maduro's re-election, US-backed opposition leader Juan Guaido illegally proclaimed himself the country's interim president and launched a campaign to oust Maduro from office.

Washington, along with some other countries, recognised Guaido, while Russia, China, Turkey and several other nations view Nicolas Maduro as the only legitimate president of Venezuela.

President Maduro, for his part, slammed the opposition leader as a US "puppet", saying his recognition by global leaders was a coup attempt staged by the United States. 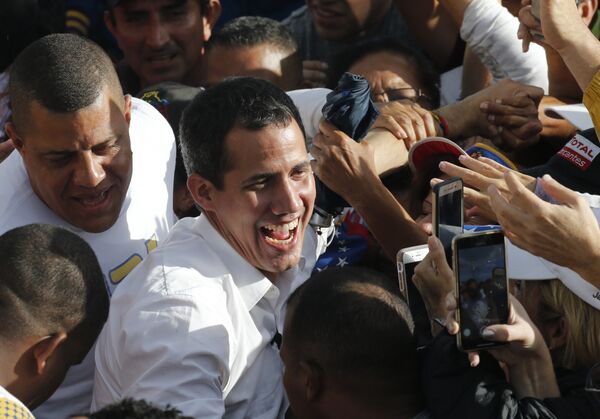 Despite Guaido’s best efforts, all attempts to incite the Armed Forces to defect to his cause have fallen through.

Commenting on the situation in Venezuela, US President Donald Trump said in January that "all options are on the table".

Washington has imposed sanctions on a number of high-level officials and Venezuelan state entities to ramp up the pressure on Maduro — and ultimately try to oust him as leader of the OPEC country.

000000
Popular comments
The US Ambassador to Venezuela, Elliot Abram, together with Victoria Nuland, and remember her 'FU EU' phone call, when she was instrumental in the Maidan Protests, also happend to be on he Board of Directors of the US tax payer funded National Endowment for Democracy NGO. The same NED NGO that is behind the Hong Kong Protests, who trained, funded and supported Navalny, over in Russia. Who trained, funded and support Guiado, who believes, withough a single vote being cast his way, that he is the President of Venezuela. So surely, the US Ambassador to the US has a conflict of interests, when going about his 'peace missions'?
anne00marie
14 September 2019, 14:03 GMT5
000000
Newsfeed
0
New firstOld first
loader
LIVE
Заголовок открываемого материала
Access to the chat has been blocked for violating the rules . You will be able to participate again through:∞. If you do not agree with the blocking, please use the feedback form
The discussion is closed. You can participate in the discussion within 24 hours after the publication of the article.
To participate in the discussion
log in or register
loader
Chats
Заголовок открываемого материала
Worldwide
InternationalEnglishEnglishMundoEspañolSpanish
Europe
DeutschlandDeutschGermanFranceFrançaisFrenchΕλλάδαΕλληνικάGreekItaliaItalianoItalianČeská republikaČeštinaCzechPolskaPolskiPolishСрбиjаСрпскиSerbianLatvijaLatviešuLatvianLietuvaLietuviųLithuanianMoldovaMoldoveneascăMoldavianБеларусьБеларускiBelarusian
Transcaucasia
ԱրմենիաՀայերենArmenianАҧсныАҧсышәалаAbkhazХуссар ИрыстонИронауОssetianსაქართველოქართულიGeorgianAzərbaycanАzərbaycancaAzerbaijani
Middle East
Sputnik عربيArabicArabicTürkiyeTürkçeTurkishSputnik ایرانPersianPersianSputnik افغانستانDariDari
Central Asia
ҚазақстанҚазақ тіліKazakhКыргызстанКыргызчаKyrgyzOʻzbekistonЎзбекчаUzbekТоҷикистонТоҷикӣTajik
East & Southeast Asia
Việt NamTiếng ViệtVietnamese日本日本語Japanese中国中文Chinese
South America
BrasilPortuguêsPortuguese
NewsfeedBreaking
12:22 GMTDominic Raab Hits Back at Afghanistan Evacuation Criticism, Complains 'Time Window' Was Too Short
12:08 GMTModi Warns BJP Lawmakers Against Skipping Parliament Sessions Amid Tensions With Opposition
12:01 GMT'This Isn't a Harry Kane We've Grown to Love': Man U Great Rio Ferdinand Rips Into Spurs Talisman
11:59 GMTChris Cuomo Preparing to Sue CNN and Demand $18 Million Plus Damages, Media Says
11:57 GMTMunawar Faruqui Dropped From Comedy Festival After BJP Member's Complaint
11:54 GMTYemen's Houthi Rebels Announce Massive Attack on Saudi Military, Oil Facilities
11:52 GMTProtesters Demand Repeal of Armed Forces Act In India's Nagaland State
11:36 GMTNew Zealand Deploys Naval Ship as Malaita Province Leader Seeks Independence from Solomon Islands
11:36 GMTUK House of Commons Discusses the 'Nationality and Borders Bill'
11:32 GMTWSJ Report on China’s Military Base on Africa’s Atlantic Coast ‘Not True' - Chinese Military Expert
11:31 GMTMinneapolis Man Arrested After Trying to 'Intimidate' Judge in Kim Potter Trial
11:14 GMTTrump's Oxygen Levels Fell 'Dangerously Low' During His Bout With COVID-19, Meadows Claims in Book
11:13 GMTChina’s Type 055 Destroyer Holds Anti-Submarine Drills Amid US Threats
11:09 GMTSouth Korea Backs Beijing Winter Olympic Games Despite US Boycott
11:04 GMTTrump Berates 'Corrupt News' Over Allegations He Was COVID-Positive Ahead of 2020 Debate With Biden
10:55 GMTLive Updates: Vladimir Putin and Joe Biden Hold Talks Amid Growing Tensions
10:52 GMTKremlin: US Decision on Beijing Olympics Can Hardly Be Called Boycott
10:45 GMTScientists Apply 'Immortality Mushroom' to Synthesise Nanogold
10:14 GMT'Blink Twice': Kamala Harris Aide 'Absolutely Loves' His Job, But Netizens Don't Buy It
10:09 GMTNovak Djokovic Signs Up for ATP Cup Amid Row Over Tennis Star's Vaccination Status